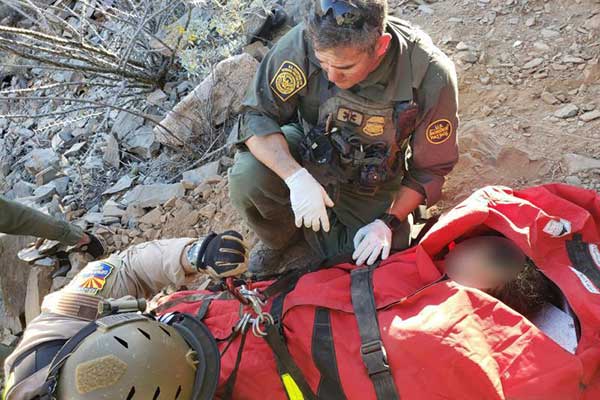 At approximately 9:00 a.m., Border Patrol agents from the Casa Grande Station discovered a set of footprints and began tracking a group of suspected illegal aliens traversing the desert south of Federal Route 28. Over the next six hours agents tracked the group in excess of 14 miles, ultimately encountering the group in the Sierra Blanco Mountains.

The group split into several smaller groups spread out along a steep mountainside in an attempt to evade agents. A CBP helicopter’s aircrew assisted ground agents in locating several illegal aliens before encountering woman collapsed on the mountainside.

Agents continued to search for and arrest members of the group in the area, while a Border Patrol emergency medical technician began to render lifesaving aid to the unconscious 24-year-old female. The woman had collapsed and began sliding down the loose rock on a hillside.

Arizona Department of Public Safety dispatched a helicopter, Ranger 5, to the scene where the EMT resorted to using a rope and carabineer system to prevent the woman from sliding further down the hillside, stabilizing her position while administering intravenous fluids.

A short time later, the Ranger 5 aircrew safely extricated the woman from the mountain and transported her to a local hospital where she is recovering from severe dehydration.

The remaining 15 illegal aliens were found in good condition. They were transported to the Casa Grande Border Patrol Station for processing.

Arizona’s desert is dangerous for those unprepared for its remote, harsh terrain and unpredictable weather. The Border Patrol advises anyone in distress to call 911 or activate a rescue beacon as soon as possible.