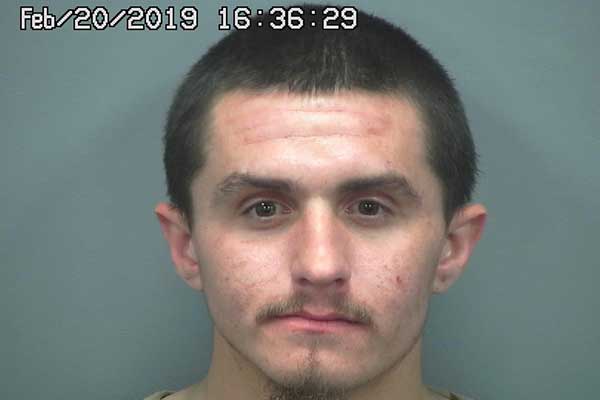 A Safford police officer was dispatched to a residence in Safford on Monday, February 18, 2019 at approximately 7:30 p.m.regarding an attempted bike theft. The reporting party said they had caught a male wearing shorts and a dark sweater with orange writing trying to take her son’s bike from her front porch. The suspect apparently ran from the home toward Lafe Nelson School. The officer arrived within minutes of the call and began canvassing the area. He located a male subject on a scooter matching the clothing description approximately two blocks from the home where the attempted theft occurred.

The young man identified himself to the officer and said he had just left his home and was on his way to a friend’s house. The officer took a picture of the young man and another officer took it to the reporting party who said that he was not the person they were looking for. The reporting party told authorities that they had been away from their home and when they returned they saw a male subject trying to take the bike from the front porch. The man ran off when they arrived and they immediately called the police.

At approximately 1:40 a.m. the officer was called back to the residence because the suspect had returned and stolen the bike from the front porch. The reporting party said that she woke up hearing her dog barking and noticed that the bike was missing from the porch. The victim had set up a camera in the window and was able to video the thief stealing the bike. According to the police report, the video footage showed a Hispanic male who appeared to be in his late teens or early 20s. The man walked up the driveway and used a pair of bolt cutters to cut the cable bike lock. The bike lock was wrapped around the bike and attached to a pole on the porch. The dog began barking at the man as he rode away on the bike. The officer put out an attempt to locate (ATL) with the description of the suspect.

The victims posted the video footage on Facebook, asking for help identifying the alleged thief. Multiple people responded, identifying the alleged thief as Daniel Gonzales. One Facebook user added a photo of the suspect, which apparently matched the video of the subject taking the bike. Authorities confirmed the identity by checking booking photos and discovered that Gonzales had an active arrest warrant for trespassing.

On Wednesday, February 20, 2019, authorities recovered a stolen vehicle in the 3400 block of 4th Street in Thatcher. During their investigation, police arrested two suspects on warrants, one being Daniel Gonzales. While being questioned at the Safford Police Department, Gonzales apparently admitted taking the bike for a friend. He refused to give the name of the friend, because he was not a “snitch.” Gonzales said that he and his friend were walking back from his aunt’s house when his friend told him about the bike. He said that the first time he went to steal the bike he noticed it was chained up. He went back at midnight with some bolt cutters that he got from his friend. The friend was with him according to his statement to police.

Gonzales showed authorities where they would find the bike using Google Earth. He said that he gave the bike to a man for letting him stay the night since he (Gonzales) is homeless. He told authorities that he had seen the video of himself stealing the bike on Facebook. He said that he felt bad about stealing the bike. Gonzales was booked into the Graham County Jail without incident.

Several officer went to the address where Gonzales said they would find the bike and contacted Andrew Arrellin. They explained that they were there for the Mongoose bike because it was stolen. Arrellin allowed police to enter the house and went to the back of the house to retrieve the bike, which was in pieces. According to the police report, this was the second stolen bicycle recovered from Arrellin’s home. Arrellin told authorities that he didn’t know the bike was stolen. He said that he paid Gonzales $20.00 for the bike.

The bike was returned to the owner who said they would take it to a shop to get an estimate on damage and missing parts.

Gonzales is also a possible suspect in an alleged car theft that occurred on February 19, 2019.