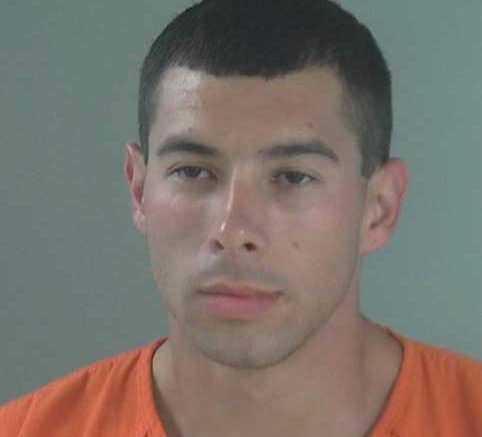 Contributed Photo/Courtesy GCSO: Cody Long was booked into jail Friday night for allegedly assaulting his girlfriend and taking her captive after she informed him that she wanted to end their relationship.

SAFFORD – Breakups can be hard, but they don’t usually give rise to multiple felonies.

A man on intensive probation due to a history of drug abuse and theft found himself on the wrong side of the law again Friday night, when he allegedly assaulted his girlfriend and imprisoned her when she tried to end their relationship.

Cody Charles Long, 25, of Safford, was arrested and booked into the Graham County Jail on charges of assault, unlawful imprisonment, preventing the use of a telephone in an emergency and disorderly conduct.

Safford officers were dispatched at about 9:39 p.m. to the 1700 block of Star Fire Circle after the victim managed to contact a friend and ask him to call the police. Authorities arrived in force as they were initially told the victim was being held at gunpoint.

While officers spoke with Long through a window, Safford Police Chief Joe Brugman and another officer entered the residence through the front door and subdued Long as he attempted to walk down some stairs where the victim was located.

The victim did not need medical attention but claimed to have been assaulted. She said she drove over to Long’s residence that night to break off their month-long relationship and told him they were over while the pair sat inside her vehicle. She said when she told Long the news he punched her in the side of her head, causing her to become dizzy.

The victim said she exited the car but was too light-headed to function and Long picked her up and took her inside, downstairs to his room, where he allegedly continued the assault.

The victim said at one point she got Long off of her and threatened to call her father. Long then allegedly took the victim’s cell phone from her and said he would “kill her and her father,” according to the police report.

The victim said she eventually played coy and convinced Long that she wanted to get back together. She said she had told a friend that she was coming over, however, and if she didn’t report back at a certain time the friend was supposed to inform the police. With that, she convinced Long to let her call her friend to tell him everything was alright, but then, in reality, asked the friend to have the police come because she was being held hostage.

Long allegedly admitted to making a fist when the victim told him of her intentions to stop seeing him romantically, but denied ever hitting her, taking her phone or preventing her from leaving the residence.

Long was already on intensive probation stemming from a series of events on Feb. 20-21, 2013, which began when he stole a 42-inch Vizio television set from Walmart and sold it for $335. He then used the money to purchase Dilaudid and Soma pills from a friend, according to Safford Police reports. Dilaudid (hydromorphone) is an opioid pain medication and Soma is a muscle relaxer.

After ingesting six or seven Soma pills and intravenously injecting two of the Dilaudid pills, Long drove his truck into a palm tree at a residence in Safford.

He was arrested on a variety of charges and his truck was towed by Nutcracker Towing to its yard in Pima. However, the jail refused to admit Long due to his level of intoxication and he was released.

Long then attempted to retrieve his truck and scaled the tow yard’s fence. Unable to release his vehicle, he proceeded to steal various items from other vehicles in storage, including a radar detector, lottery Scratchers tickets, three car batteries, a can of gas and a stereo. He then sold those items for drugs and went back to Walmart on Feb. 21 to attempt to steal another television with an acquaintance. That attempt was foiled by store employees.

After being wanted by police for more than a week, Long entered the Safford Police Department high on Percocet and turned himself in. He later pleaded guilty to trafficking in stolen property and possession of drug paraphernalia in one case, two counts of burglary in the third degree in another case and possession of a dangerous drug, DUI, leaving the scene of an accident and criminal damage in the third case.