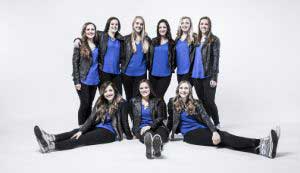 The newest official performing ensemble at BYU, Noteworthy is composed of nine female singers who deliver a power-packed concert that combines vocal percussion, humor, and a tight harmonic style that’s all their own. Noteworthy appeared on the first season of NBC’s television show The Sing-Off, won first place in the International Championship of Collegiate A Cappella in 2007, and has been featured in stories by NBC Sports and BYU Magazine.
The group’s most popular music video and single—“Amazing Grace (My Chains Are Gone)”—has received more than 17 million views on YouTube since its release in 2015. Noteworthy originates in the office of BYU Performing Arts Management.