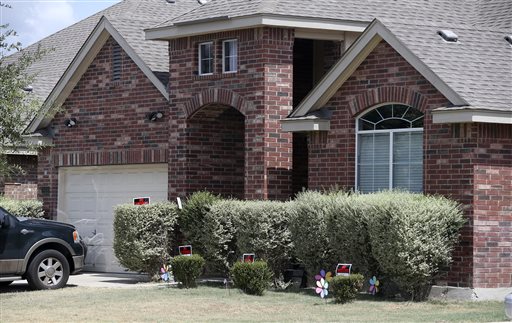 No trespassing signs are visible at the house Tuesday, Sept. 1, 2015, where deputies fatally shot Gilbert Flores, in Northwest Bexar County, Texas, near San Antonio, last Friday. A Texas prosecutor says a second video has emerged that gives authorities a very clear view of a confrontation between deputies and Flores who had his hands raised before he was shot and killed. (John Davenport/The San Antonio Express-News via AP) RUMBO DE SAN ANTONIO OUT; NO SALES; MANDATORY CREDIT

SAN ANTONIO (AP) — A second video has emerged that gives authorities a “very clear view” of a confrontation between deputies and a Texas man who had his hands raised before he was shot and killed, a prosecutor said Tuesday.

Bexar County District Attorney Nico LaHood described the new video and one broadcast earlier as “disturbing,” but cautioned against a rush to judgment as authorities investigate the shooting that killed 41-year-old Gilbert Flores northwest of San Antonio.

An initial video recorded by a motorist from some distance was posted online by a San Antonio TV station. It shows Flores outside a residence Friday facing two deputies when he raises his hands — one arm obscured by a utility pole. The deputies fired multiple times.

Sheriff’s officials say Flores was armed, though didn’t specify with what, and that nonlethal efforts to subdue him, including a Taser, were unsuccessful. LaHood declined to say Tuesday whether Flores’ arm motion was surrender.

“I don’t know what his intent was,” he said. “All I can tell you is the video is disturbing. But my encouragement to everyone is to press the pause button.”

San Antonio attorney Thomas J. Henry, who is representing the family, said in an interview Tuesday that the initial video appears to show that deadly force was unnecessary but he is seeking more evidence.

“From a lay perspective, seeing the video, it does appear the immediate danger is gone because he had both hands in the air,” Henry said. “Now there are other videos and other pieces of evidence that we want to gather.” He said the family is considering filing a lawsuit to compel authorities to turn over more evidence.

Flores’ death is the country’s latest law enforcement shooting to draw heavy scrutiny for using deadly force in a situation where it may not have been necessary. Law enforcement officials in the U.S. have expressed concern that the deadly confrontations have spawned retaliatory shootings of officers, including last week’s death of a suburban Houston deputy at a gas station.

The second video was recorded by a witness closer to the incident, LaHood said, but he declined to provide further information about what it reveals or when authorities acquired it. An investigation is underway to determine whether the deputies will face criminal charges or whether the danger to them was imminent, LaHood said.

Deputies Greg Vasquez and Robert Sanchez, who were not equipped with body cameras at the time of the encounter, have been placed on administrative leave. Sanchez has worked more than 20 years with the sheriff’s office and Vasquez has been with the agency more than 10 years, according to records with the Texas Commission on Law Enforcement. Both had received training in use of force and nonlethal devices.

Michelle Lee, a special agent for the FBI in San Antonio, confirmed Tuesday that “experienced civil rights investigators” are monitoring the investigation.

The deputies had responded to a domestic disturbance, authorities have said, and found a woman at the residence with a cut on her head and a baby who appeared to be injured. Sheriff’s officials have not indicated whether they believe Flores harmed the two.

Attempts to contact members of Flores’ family were unsuccessful Tuesday, but Henry said that Flores’ wife is devastated. The couple have a child who is just 21 days old, he said.

Bexar County court records show Flores was convicted in 2003 of aggravated robbery, and the San Antonio Express-News reports he also has a conviction for assault with a deadly weapon.

U.S. Rep. Joaquin Castro, who represents part of the San Antonio area, said in a statement that Friday’s shooting was “extremely disturbing.”

“This incident is further evidence that police officers and deputies should wear body cameras,” he said. “The widely supported technology brings transparency and accountability that protects law enforcement and civilians alike.”