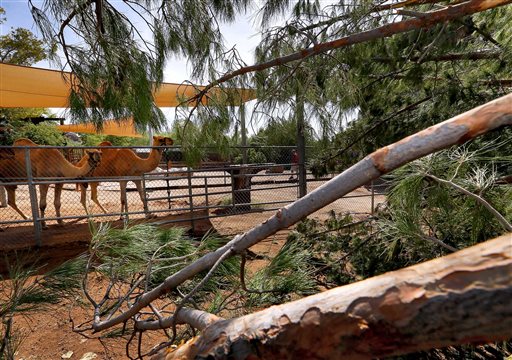 Dromedary camels are tied up, Tuesday, Sept. 1, 201 at the Phoenix Zoo, away from a large pine tree that fell into their exhibit late Monday evening. Monsoon storms hit the Phoenix area Monday night and knocked out power to thousands, delayed air travel, and stranded motorists in flash floods. The Phoenix Zoo had to close for the day to remove storm-damaged and fallen trees throughout the park. (AP Photo/Matt York)

PHOENIX (AP) — A few thousand people still don’t have electricity and the Phoenix Zoo is closed for a second day after a monsoon storm knocked down power poles and trees.

Zoo officials are still cleaning up and say there some fencing was also damaged but all the animals are OK and accounted for. Some of the downed trees will be used in animal habitats.

Meanwhile, Arizona Public Service Co. says the number of customers still without power from Monday night’s severe storm has dropped to fewer than 3,000 as crews make repairs and replace downed lines and poles.

The number of Salt River Project customers still without power is in the dozens.

The two utilities had a total of about 70,000 customers without power immediately after the storm.