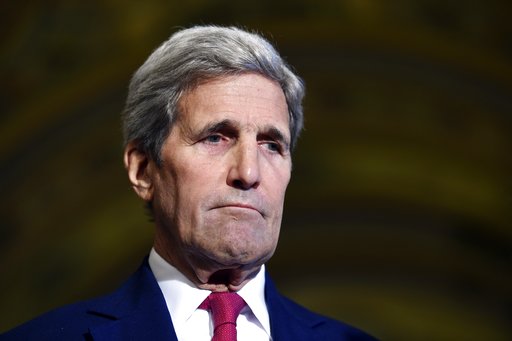 FILE - In this Sept. 9, 2015 file photo, then-Secretary of State John Kerry listens during a news conference on Capitol Hill in Washington on the Iran nuclear deal. The Trump administration said Wednesday, May 17, 2017, it will continue granting nuclear sanctions relief to Iran, keeping the Obama-era nuclear deal intact for now. The most recent waiver, issued by former Secretary of State John Kerry in December, was set to expire this week. (AP Photo/Susan Walsh, File)

WASHINGTON (AP) — The Trump administration took a key step Wednesday toward preserving the Obama-era nuclear deal with Iran, coupling the move with fresh ballistic missile sanctions to show it isn’t going light on the Islamic republic.

The State Department said Iran would continue to enjoy relief from decades-old economic measures punishing Tehran for its nuclear program. Under the 2015 nuclear agreement, the U.S. lifted those sanctions. But Washington must issue periodical waivers to keep the penalties from snapping back into place and the most recent one was set to expire this week.

Donald Trump as a candidate vowed to renegotiate or tear up the nuclear deal. As president, he has altered his position, insisting he is still studying the accord and hasn’t made a final decision. The move to extend the sanctions relief in the meantime was another indication Trump may be laying the groundwork to let the deal stand.

Still, the U.S. paired the announcement with new, unrelated sanctions that go after Iran for a ballistic missiles program that Washington fears could target American interests in the Middle East or key allies such as Israel and Saudi Arabia.

The dual moves — ensuring old sanctions on Iran don’t return while imposing new ones — appeared aimed at undercutting the impression that Trump’s stance on Iran has softened. Since taking office, Trump’s administration has sanctioned hundreds in Iran and in Syria — an Iranian ally — as part of a campaign to increase pressure on Iran even as it reviews the nuclear deal.

Stuart Jones, the top U.S. diplomat in charge of the Middle East, said the U.S. is still forming a “comprehensive Iran policy” that addresses Iran’s support for Syrian President Bashar Assad’s government and militant groups in Lebanon, Iraq and Yemen.

“This ongoing review does not diminish the United States’ resolve to continue countering Iran’s destabilizing activity in the region, whether it be supporting the Assad regime, backing terrorist organizations like Hezbollah, or supporting violent militias that undermine governments in Iraq and Yemen,” Jones said. “And above all, the United States will never allow the regime in Iran to acquire nuclear weapons.”

In a similar move last month, Trump’s administration certified to Congress that Iran is complying with the terms of the deal — a requirement for Iran to keep receiving the economic benefits of the deal. At the same time, Trump dispatched Secretary of State Rex Tillerson to issue a scathing critique of Iran in which he also cast doubt that the nuclear deal would achieve its objective of keeping Tehran from developing nuclear weapons.

Trump also announced late Wednesday that the U.S. didn’t intend to limit Iran’s ability to sell oil. In a memo to Tillerson and the secretaries of Energy and Treasury, Trump said there’s enough oil being produced currently by other countries that Iran’s output could be reduced without hurting global supplies. But he said that given U.S. commitments under the nuclear deal, “the United States is not pursuing efforts to reduce Iran’s sales of crude oil at this time.”

“I will continue to monitor this situation closely,” Trump added.

The moves come as Iran prepares for a presidential vote on Friday whose outcome has major implications for Iran’s future stance toward the U.S. and its likelihood of sticking with the deal. President Hassan Rouhani, a moderate who oversaw the clinching of the nuclear deal, faces challenges from hard-liners who have stridently criticized the deal.

The new sanctions announced Wednesday hit Morteza Farasatpour, a top Iranian defense official who oversaw the sale of explosives and other materials used by Syria’s Scientific Studies and Research Center, the Treasury Department said. The Syrian agency produces non-conventional weapons such as the chemical weapons that Assad’s forces used earlier this year.

The U.S. also punished another Iranian official it said has been involved in Iran’s ballistic missile program, as well as Matin Sanat Nik Andishan, a company based in Iran that the U.S. said helped obtain materials for the ballistic missile program. The sanctions also target a series of Chinese companies associated with Ruan Runling, a Chinese citizen. The U.S. said his network helped produce electronics such as missile guidance for Iran’s program.

Mark Dubowitz, an Iran expert and head of the Washington-based Foundation for Defense of Democracies, which advocates for a tough U.S. position on Iran, said the latest steps were part of a “much more comprehensive strategy to use all instruments of American power to roll back Iranian regional aggression” and to “rectify what the administration sees as a deeply flawed nuclear deal.”

Also on Wednesday, Iranian state media said four passenger airplanes were being delivered as the first installment of a deal with French-Italian manufacturer ATR that was finalized after the nuclear agreement. Iran is buying 20 of the ATR 72-600 planes. It also has clinched bigger deals with trans-Atlantic rivals Airbus and Boeing.

Under the 2015 deal, the U.S. and other world powers eased sanctions after the U.N.’s International Atomic Energy Agency confirmed that Iran had taken a series of steps to pull its nuclear program back from the brink of weapons capability.