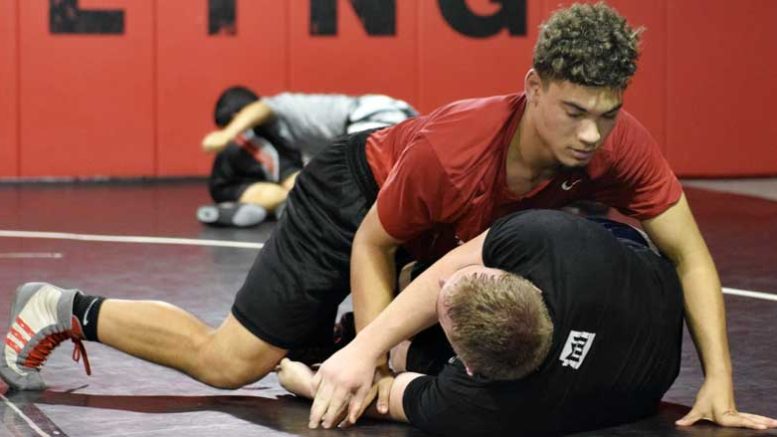 Photo By Raymundo Frasquillo: Senior Jacob Vierra, 2017 state runner-up, gains an advantage over sophomore Willey during a recent practice session. Vierra went 3-1 at the state meet and the same in the sectional for third while Wiley also went 3-1 at the sectional, but 0-2 at state. Morenci opens its season at home Wednesday.

MORENCI – Morenci opens its 2017 mat season in Wildcat Memorial Gymnasium with an 8-team multi-meet Wednesday, Nov. 29, and closes out the week as a split squad Friday and Saturday, Dec. 1-2, half in the Gila Valley Invitational and the other half in the Mesa Red Mountain Invitational.

Scheduled to join Morenci are the Benson Bobcats, the Globe Tigers, the Miami Vandals, the San Carlos Braves, the San Manuel Miners, the Thatcher Eagles, and the Tombstone Yellow Jackets. 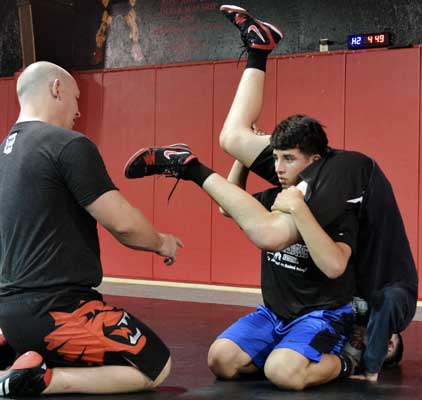 At the conclusion of the 47-team 2017 state meet, the Bobcats were fifth, the Eagles 19th, the Miners 22nd, the Tigers tied for 26th, the Yellow Jackets tied for 34th, the Braves tied for 40th, and the Vandals did not qualify.

Morenci returns seven of 13 state meet participants from last season. Four placed in the top three, two as champions, one as a runner-up, and the other in third.

“The first season here was the hardest for me,” Woodall said. ”I didn’t have to do as much work after that. I’m blessed with being able to do something I enjoy.”

Woodall can’t tell you where the team will finish at season’s end, whether hoisting the top award or not, but he can tell you the Wildcats will be prepared to do their best every time they set foot on the mat. He measures success not by a won-loss record, but by an improvement.

“It doesn’t matter what the individual records are to me,” Woodall said, “as long as they do their best every time out and improve.”

Photo By Raymundo Frasquillo: Fifth-year Morenci wrestling head coach Casey Woodall gives a demonstration of a move he wants the Wildcats to practice during a recent session. The native son is a two-time state champion with an unbeaten record as a junior and a 2002 MHS grad who pursued his dream at the next level, becoming a three-time collegiate Academic All-American and two-time athletic All-American at Adams State College in Colorado.

The Wildcats in the program have bought into his way of doing things, including preparing during the off-season.

Three of the four members of the class of 2017 were offered college scholarships for their hard work in the classroom and in wrestling, Jordan Gregory Arbizo to Northwest Kansas Technical College, Francisco Mendoza Gonzalez to New Mexico Highlands University, and Christian Diego White to Newberry College.

The Wildcats will compete in five meets during January, hosting a dual with St. Johns on the 9th, the two-day New Mexico Silver Triangle on the 10th, the two-day Doc Wright Invitational in Winslow on the 12-13th, the Thatcher Multi on the 16th, and the Globe Multi on the 24th.

The state-qualifying sectional meet is Feb. 3 at a site to be determined and the two-day state meet is Feb. 9-10 at Prescott Valley.