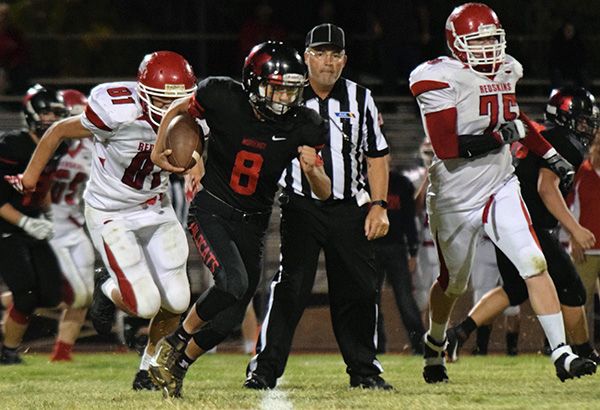 Contributed Photo/Courtesy Raymundo Frasquillo: Morenci junior Steven Chavarria (8) makes his way down the field near the end of the first half against St. Johns on Friday. Morenci lost the game, 39-14.

“It makes me sick to my stomach,” he said.

St. Johns entered Lawson Stadium with an unblemished record and without yielding any points defensively through four games.

The Wildcats had struggled to complete assignments, missing blocks and giving up yardage in two prior losses. Morenci managed to put up 14 points on the Redskins and appeared to be able to score more. Although 11 offensive possessions were had, only two resulted in scores. Meanwhile, St. Johns totaled 12 possessions and scored three times each half.

Sandoval did not offer excuses. It is not his style. He will merely say ‘they executed and got the job done. We didn’t.’ After a team review of the game film the following morning to see what went right and what didn’t, necessary adjustments will be made and they will move on.

Morenci received the opening kickoff, drove 66 yards in 10 plays taking slightly more than four minutes, and crossed into the end zone on a Kyle Swann 1-yard run. Esai Vanegas added the conversion kick to give the host a 7-0 advantage with 4:10 elapsed on the clock. Swann gained 30 yards on three carries and completed a pass to senior Gavin Chavez for 21 yards, and senior Frankie Gonzalez rushed for 15 on five carries on the drive.

St. Johns drove 49 yards in eight plays before a penalty set it back five yards. Senior Trent Sherwood crossed into the end zone for a 6-yard score, recording the Redskins’ first of six touchdowns on the night. Junior Joseph Ramsey’s conversion run gave the visitors the lead for good with 2:48 left in the opening period.

Morenci punted on fourth down during its next three possessions. While the Wildcats needed 51 yards, 68 yards, and 54 yards to score, they only picked up five, six, and a minus 25 yards, respectively on the three drives.

After twice punting on fourth down, the Redskins used a third-and-10 strike on their fourth possession for an 85-yard TD. The extra point attempt was stopped. St. Johns led 14-7 with 5:37 remaining until halftime. 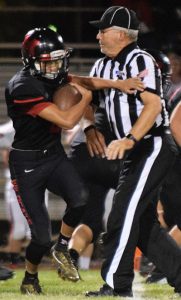 Contributed Photo/Courtesy Raymundo Frasquillo: Morenci junior Steven Chavarria (8) pushes the referee aside as he churns his way down the field.

Needing 64 yards for a possible tie, Morenci punted on fourth-and-6 while St. Johns drove 69 yards in six plays using 3:23. Again, a John Robertson aerial connection netted a 45-yard TD. A conversion pass fell incomplete, but the Redskins led 20-7 with 39 seconds remaining in the first half.

Getting the ball with 34 seconds on the clock, junior Steven Chavarria followed senior blockers Jordan Arbizo and Andrew Esparza, warded off the game umpire and picked up 36 yards for a first down. Another run gained 11 yards while a third carry went for eight yards. Time expired before the second-and-2 was snapped from 12 yards out.

Although the visitors won the opening coin toss and deferred to the second half, it did not go smooth at the start of the third period.

Vanegas recovered a St. Johns fumble on second-and-1 during the initial possession of the second half. The Wildcats were in business, using 1:27 to cover 37 yards in six plays, including a pair of Chavarria runs netting 13 yards, two Swann incompletions and a 5-yard penalty, before Swann connected for a 24-yard TD. A Vanegas kick got the Wildcats within 6 points (14-20) with 2:19 elapsed in the second half.

However, St. Johns used 5:07 to cover 65 yards in 10 plays on the ensuing possession. Robertson connected with Ethan Jessop for an 11-yard TD. The conversion pass fell incomplete, but the Redskins stretched their lead to 12 points (26-14) with 4:32 left in the third period.

An interception on third-and-14, coming up short on fourth-and-2, a fumble on a kickoff and an incompletion on fourth-and-10 ended the Wildcats’ final four possessions.

St. Johns punted on fourth-and-11, capped a 51-yard drive with a 4-yard TD run after using four plays (32-14), went 40 yards following a fumble recovery for a 1-yard TD run plus extra point kick (39-14) and ran out the remaining 2:03 of the game to account for its last four possessions.

Morenci will next face San Carlos (0-2 section, 0-5 overall) for its homecoming game Friday.