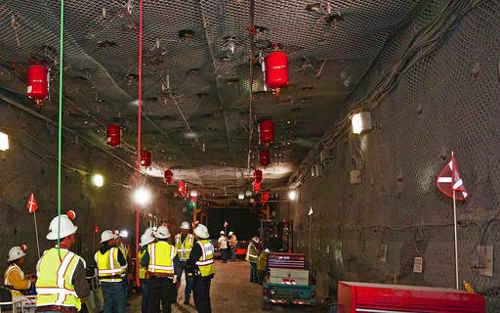 ALBUQUERQUE, N.M. (AP) — The U.S. Energy Department authorized its contractor Friday to begin disposing of radioactive waste again at the nation’s only underground repository, setting the stage for the first barrel to go below ground since a radiation release forced the facility to shut down nearly three years ago.

Agency officials said the move confirms that numerous corrective actions uncovered during a recent review of the Waste Isolation Pilot Plant in southern New Mexico have been completed.

A team of Energy Department experts from around the nation had found paperwork and documentation issues that needed to be fixed. It also had found inadequate procedures for new requirements on accepting waste from national laboratories and other defense sites.

The federal government called the authorization a major milestone.

“Safety has and will continue to be our number one priority,” Energy Department spokeswoman Bridget Bartol said, noting that workers will complete minor maintenance on the walls and floors of the underground disposal area before waste-handling work resumes.

The Waste Isolation Pilot Plant has been closed since February 2014 when a radiation release contaminated a significant portion of the repository, where disposal rooms are carved out of a thick salt formation deep underground.

The shutdown put shipments from around the country on indefinite hold as the federal government poured hundreds of millions of dollars into recovery efforts and policy overhauls.

New Mexico regulators cited the government and the contractor for numerous permit violations related to the radiation release and an unrelated fire involving a mining truck weeks earlier. That resulted in a multimillion-dollar settlement with the state.

Los Alamos National Laboratory, in northern New Mexico, also was cited because the breached container of waste from 2014 had been inappropriately packed there before being shipped to the repository.

Investigators said the incident could have been avoided had managers not ignored existing policies and procedures for handling and treating the waste, which includes gloves, tools, clothing and other materials from decades of bomb-making and research.

The Energy Department released a slew of documents Friday related to reviews of the facility’s readiness to reopen that state and federal officials conducted in recent weeks. State officials gave their approval for work to resume in letters sent to the federal agency late last week.

Some watchdog groups had asked the department not to rush, citing the previous incidents and the importance of the facility to the nation’s multibillion-dollar cleanup of Cold War-era waste.