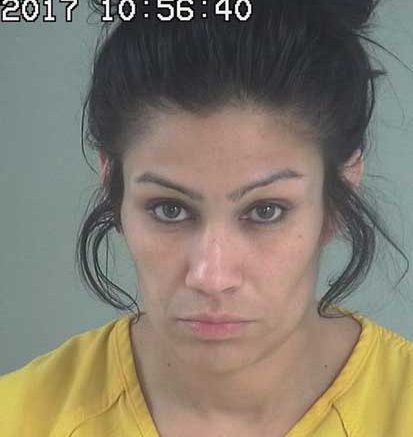 Contributed Photo/Courtesy GCSO: Marissa Ornelas was booked into the Graham County Jail for transportation of a dangerous drug for sale and possession of drug paraphernalia after a traffic stop netted 14 grams of methamphetamine.

SAFFORD – Adam Carolla may advise people to keep the temporary dealer license plates on vehicles as long as possible, but in the Gila Valley that just attracts attention from law enforcement.

A Safford officer confiscated 14 grams of methamphetamine and booked a woman into jail for transportation of meth for sale early Sunday morning after pulling over a Jeep for moving violations.

Marissa Ornelas, 33, of Safford, was arrested and booked into the Graham County Jail on charges of transportation of a dangerous drug (methamphetamine) for sale and possession of drug paraphernalia. If convicted on the for sale charge, she faces a minimum of 10 years in prison. The threshold for a presumptive for sale charge of meth in Arizona is nine grams.

Ornelas was a passenger in a black Jeep driven by John Ballard, 28, of Safford, when an officer initiated a traffic stop on them at about 2:32 a.m. The officer noticed Ballard fail to signal multiple times as it drove from an alley along Main Street onto 7th Street or when he turned from 7th Street onto 12th Avenue. Additionally, the Jeep had a temporary license plate in its rear window as well as a regular license plate on its rear hatch.

During the officer’s interaction, Ballard was found to be in possession of two partially consumed marijuana joints and a glass marijuana pipe. He was given a citation and released at the scene.

However, a purse allegedly belonging to Ornelas was found to have a baggie with 14 grams of meth and other drug paraphernalia was found, including a meth pipe and a digital scale.

After the items were located and Ornelas was told she would be placed under arrest, her mother who lives with Ornelas and Ornelas’ child was called to the scene. Ornelas’ mother was also out for the night and the child was at home with a babysitter.

The officer received Ornelas’ permission to perform a welfare check on the child and found both the child and babysitter asleep. During the check, the officer also located another digital scale and numerous unused plastic baggies.

Ornelas was then taken into custody and her daughter was left in the care of her mother.