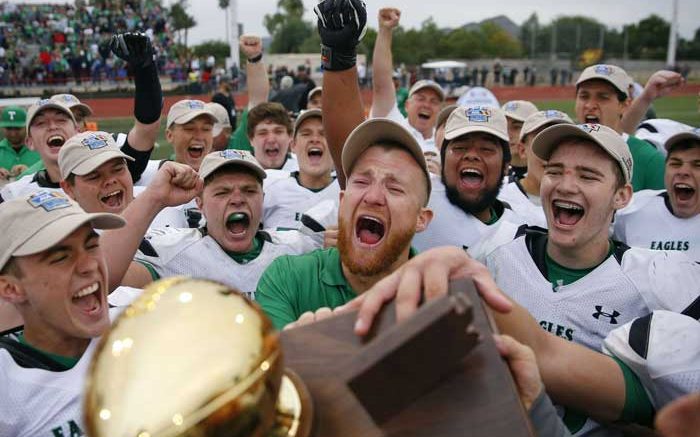 Photo By Michael Chow: The Thatcher Eagles beat the Eager Round Valley Elks, 33-28, to take home the Arizona State 2A Football Championship trophy.

SCOTTSDALE – The No. 3 seed Thatcher Eagles (12-2) avenged its loss earlier in the year to sectional rival and previously unbeaten No. 1 seed Eager Round Valley Elks (13-1), to become the 2016 2A state champions. It was the second unbeaten team taken down by Thatcher in the playoffs.

It was standing-room only at Chaparral High School in Scottsdale as Thatcher utilized its stifling defense and special teams play to hold off Round Valley, 33-28.

While Thatcher’s defense gave up 253 yards through the air, the bend but don’t break defensive front and linebackers held Round Valley to a total of just 99 yards on the ground.

The Elks certainly came to play, however, and owned the first quarter while using up roughly 10 minutes of the period.

The Elks were initially successful with the run as they pounded the ball down the field until they faced a third down and nine from midfield. Quarterback Kyron Woolf then hit Rhett Bingham for 12 yards and the first down.

After breaking the ice on its throwing game, the Elks went back to the air and back to Bingham, who snagged a 25-yard touchdown pass from Woolf on second down to open the scoring for the night. The extra point was good and Round Valley was on top, 7-0 over Thatcher. Woolf finished the night 18 for 34 for 253 yards and four touchdowns. 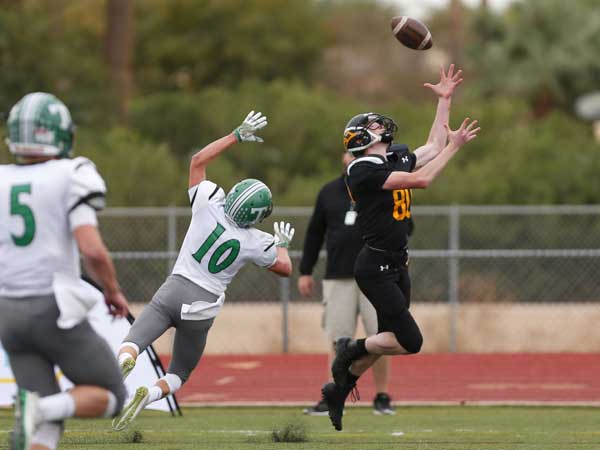 Photo By Michael Chow: Round Valley’s Rhett Bingham hauls in a touchdown.

Thatcher went three-and-out on its first possession, and Round Valley started its second possession on its own 17 yard line.

The Elks continued its ground-game dominance and converted a couple of third downs on the drive. Facing a fourth and inches at its own 46 yard line, the Elks pounded the ball through the middle for six yards and a first down.

Shortly after the start of the second quarter, Woolf threw up a jump ball into the end zone to Braidan Eisenlord, who brought it down for a 40-yard touchdown. The extra point was good, and Thatcher found itself in an early hole, down 14-0. 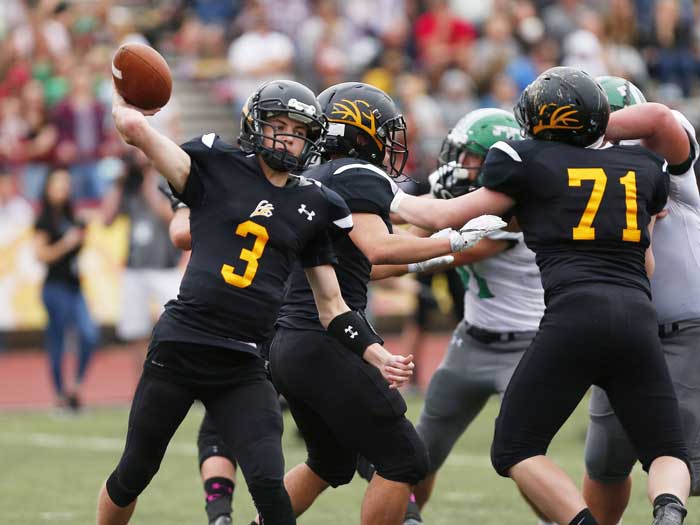 Photo By Michael Chow: Round Valley quarterback Kyron Woolf goes back to pass.

Round Valley had scored twice on its first two drives of 80 and 83 yards while Thatcher only had three snaps the entire first quarter.

Thatcher responded in kind, however, sparked by a 27-yard scamper by quarterback Jake Dunlap to get the ball near mid-field.

After moving the ball into the red zone, Dunlap was sacked on third down. Facing fourth and nine from Round Valley’s 18 yard line, Thatcher head coach Sean Hinton initially sent out the field goal unit but then took a time out.

After the timeout, the regular offense returned and Hinton threw the dice. The gamble paid off as Dunlap faked to one side and then threw a screen pass to Dallin Cook on the opposite side. Cook brushed off a tackle and went 18 yards into the end zone to put Thatcher on the board. 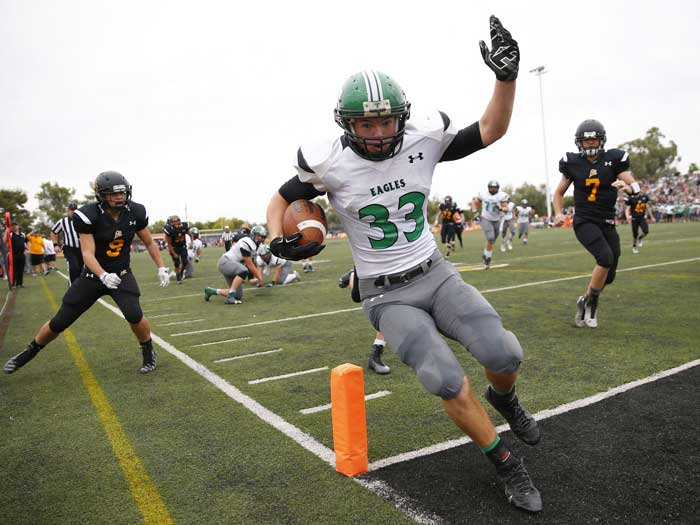 The extra point was good, and the Eagles were down just one possession, 14-7 with 7:39 until halftime. Dunlap finished 5 for 11 for 43 yards and a touchdown and ran 18 times for 140 yards and three touchdowns. 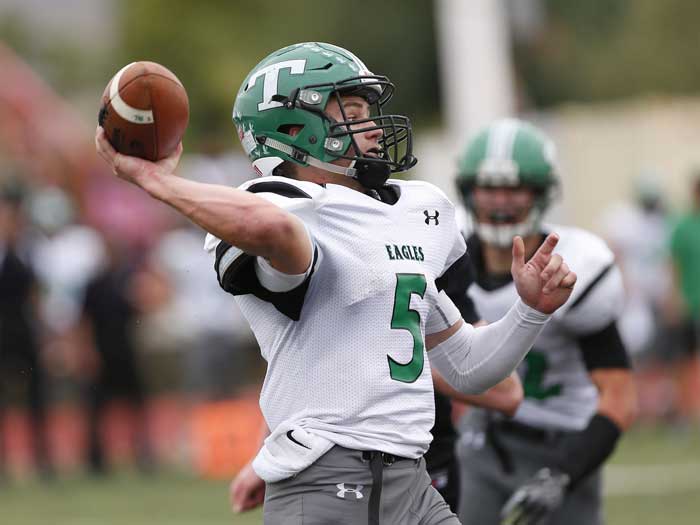 The Eagles defense then showed up and forced its own three-and-out. The Elks punted for the first time, and the Eagles enjoyed good field position on its third possession, starting at its own 47 yard line.

Thatcher methodically moved the ball down the field, aided by a big 17-yard burst by Brandon Hayes to put the Eagles back into the red zone.

On first and goal from the three yard line, Dunlap called his own number and burst in for the score with 1:32 left in the half. The extra point was missed, however, and Round Valley went into halftime up 14-13. 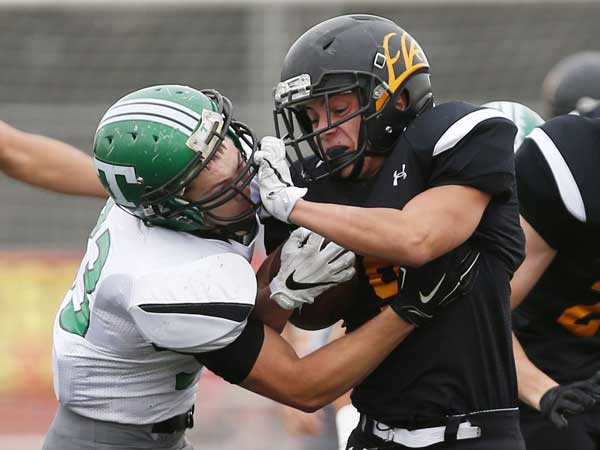 The Eagles continued to turn the tables on the Elks after the break.

Thatcher received the second half kickoff and began a long drive of its own, assisted by a big 47-yard run by Dunlap to Round Valley’s 34 yard line.

Nate Lee got hurt on a nine-yard loss on a pass from Dunlap and had to leave the game. However, Lee would return a couple of plays later.

Facing fourth and 17 in no man’s land from the Elks’ 35 yard line, Dunlap hit Dallin Cook on a  big-time pass of 22 yards to set up Thatcher first and 10 at the 20 yard line.

On third and goal from the one yard line, Dunlap took it in again and Thatcher had its first lead of the night. Lee was stopped on the 2-point conversion attempt, but Thatcher still led 19-14 with 6:48 in the third quarter.

The Thatcher defense then stopped Round Valley on its next possession when the Elks’ Bingham couldn’t hold on to a 60-yard pass from Woolf on third down and 16.

Special teams then came into play as Thatcher’s Layton Alder burst through the line to block and recover the punt, and Thatcher was set up first and goal at the three yard line.

Thatcher made good on the turnover, and, on second and goal from the two yard line, Dunlap burst in for his third rushing touchdown on the day. The extra point was true, and Thatcher extended its lead to 26-14 with 3:43 left in the third quarter. 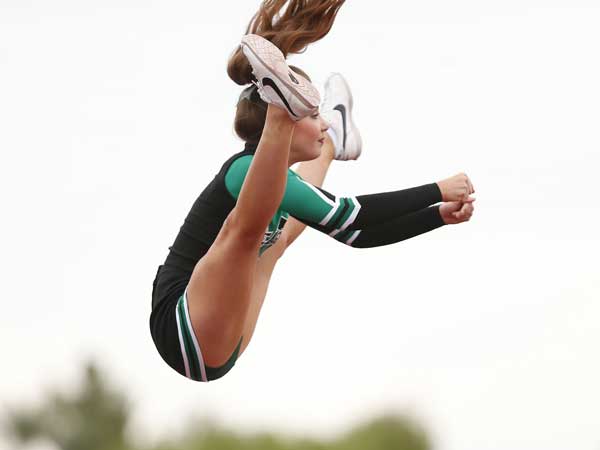 After both teams had three-and-outs, Round Valley began its drive from around mid-field as the teams entered the fourth quarter of play.

The Thatcher defense must have eaten its Wheaties during halftime because it came out with a purpose and drive. After a big stick by Jordan Herbert knocked Bingham out for a play, linebacker Jonathan Trujillo sacked Woolf on fourth and five at Thatcher’s 30 yard line.

Thatcher couldn’t capitalize on the turnover on downs, however, and had to punt the ball back to Round Valley.

The Elks showed they weren’t going to go away quietly and quickly moved the ball back into Thatcher’s territory. Woolf then hit Bryson Brown on a 39-yard touchdown pass. The extra point was good and Round Valley crawled itself back into it, down just five points, 26-21, with 6:22 left in the game.

Dunlap helped moved the field position for the Eagles with a big, 23-yard run to mid-field. The Eagles would go no further, however, and had to punt the ball away.

Round Valley started its possession at its own 16 yard line, looking at 84 yards to go to win and with 3:42 to do it.

Facing fourth down and 12 from its own 16, Round Valley’s punter barely corralled a high snap. With the previous block likely still ringing in his head, the punter attempted to run for the first down instead of kicking it away. What would become the gamble of the game was shuttered as the Elks turned the ball over on downs.

Thatcher took over in the red zone, and it didn’t take long for Lee to shake off being battered all game as he tossed off would-be tacklers on his way to a 16-yard touchdown. Lee finished the night with 12 carries for 45 yards and a touchdown. 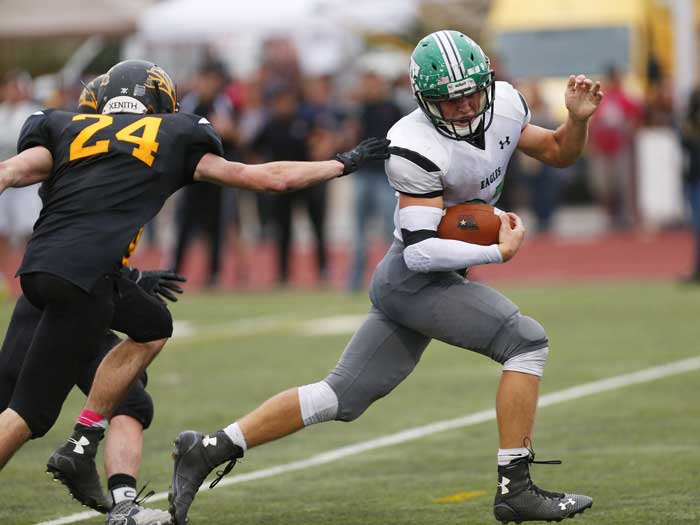 The extra point by Tormod Sandven was good, and Thatcher went up 33-21 with just 2:33 left in the game.

Round Valley continued to fight, however, but all appeared lost when Aric Peterson picked off Woolf in the end zone with 1:24 to play and returned it past mid-field. Thatcher was called for roughing the passer, however, and Round Valley had new life as the interception was nullified.

Woolf made the Eagles pay for hitting him late as he then tossed a 19-yard touchdown to Marshall Donaldson. The kick was good, and Round Valley trailed 33-28 with 55 seconds to play in the game.

Round Valley’s onside kick was handled by Dunlap and it was all over. The Eagles ran the clock out the rest of the way and brought the state championship back to Thatcher for the first time since 2006. 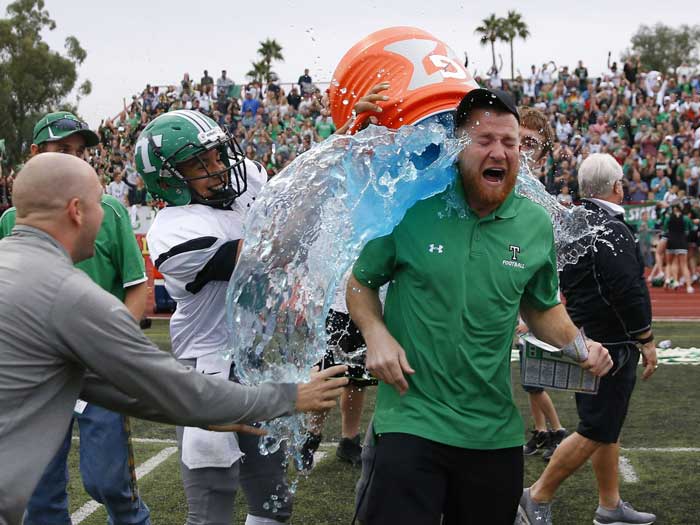