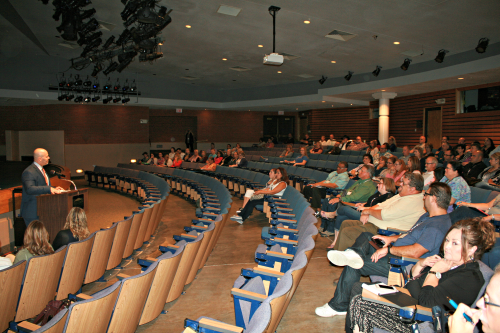 THATCHER – When it comes to fighting the disease of drug addiction, knowledge is power. 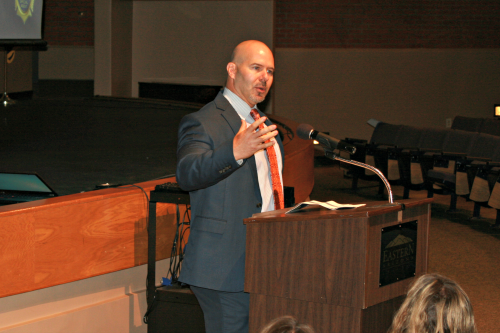 Judge Peterson stressed drug use prevention as a weapon against the disease of addiction. In his speech, he urged those attending to never try illegal drugs.

“The lie is that you can stop anytime,” Judge Peterson said.

Judge Peterson later told Gila Valley Central that he believed prevention to be a major tool against the war of addiction. He also said that a system should be in place to aid recovering addicts who wish to help themselves. By doing these two things, he believes crime would be nearly eradicated.

“Those who never use illegal drugs will never become drug addicts,” Peterson said.  “Also, with respect to the cure portion of the equation, the reality is that we need to give people who wish to help themselves a reasonable and realistic opportunity for rehabilitation. Because if we could eradicate the root cause of the problem, if people stop using illegal drugs, the vast majority of crime in our community would no longer take place. So the event today is really important to try to emphasize prevention as well as cure.”

Mariah Hile, the Market Development Manager for Valley Hope and a keynote speaker at the conference, wanted to convey to the public the message of humanity. She stressed the need for the community to remember that an addict is still a person. In Hile’s call against stigmatization, she urged the public to stop dehumanizing each other.

“It’s important to reduce the shame and the stigma with this disease so that more people will get help,” she said. “If we continue to stigmatize this, more people are going to die. No more stigma, that’s what I want. And I want people to get better. It kills me when people call other people junkies. Those are people; they’re not junkies. They’re people who struggle. Embrace one another, let people know that it’s okay to struggle and I feel like when we let people come forward, and destigmatize this, we’re healing the nation.”

Kari Stewart, a Safford resident, and former addict, agreed with Hile in the call for destigmatization. Stewart emphasized the fact that she was not defined by her past addiction, and that she was not a bad person because of it.

“I’ve worked for the Department of Defense in Washington, D.C. for 13 years with top secret clearance,” Stewart said. “I’m not a junkie. That doesn’t define who I am. I once was there, and my recovery has been up and down and all over the place  because later on through my recovery I was diagnosed with bipolar depression. So I’m also the face of mental illness. It’s not a bad thing. I’m not a bad person, and I’m no less than anybody else.”

There was a program specifically for youth ages 12-16, as well as keynote speakers for adults. After Judge Peterson’s remarks, the youth were separated into a different part of the activity center, where the Graham County Youth Advocates presented various educational lectures.  Safford, Pima, Ft. Thoma, and Nogales schools sent students to attend the conference. These students were also joined by Eastern Arizona College’s Gear Up program. At the beginning of the presentation, Ella Peterson performed a rap solo. Her solo is below:

Yo listen up, ya’ll
My name is Ella, Jess, Ryleigh
and I’m laying down a lesson that will make you smile- about how using drugs right now will make your life go wild!
Some people may think marijuana is gold, but unto it your soul will be sold!
Most people say you can stop anytime, but if that were true I wouldn’t be singing this rhyme!
Just cuz others do it too, doesn’t make it right,
Unless prison orange is the color you like!
Just as you can see – The moral is: Drugs are not the proper way to mantel your biz!