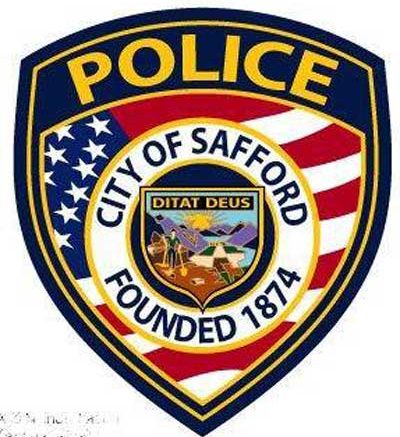 SAFFORD – A group of three individuals drove a long way just to shoplift a couple markers and a soda and get caught with drugs and drug paraphernalia late Monday night.

According to a Safford Police report, two men and a woman traveled from Clifton in a brown Chevrolet Impala to the Walmart at 755 S. 20th Ave. However, only the female exited the vehicle and went into the store, which was at about 11:38 p.m.

The officers were observing the store and noticed the woman emerge roughly 40 minutes later with her previously flat purse now bulging and carrying no shopping bags or merchandise in plain sight.

As the Impala pulled out onto 20th Avenue, the driver forgot to turn his headlights on and the officers soon performed a traffic stop.

The driver, Anthony Trychel, 33, of Clifton, said the two other occupants, identified as Victoria Hammonds, 29, of Morenci, and Larry Montano, 28, of Clifton, had paid him gas money to take them to the Walmart. Hammonds later admitted to the officer to stealing two silver markers and a bottle of Mountain Dew, which were found in her bag.

During a search of the vehicle, officers located another bag that contained two syringes, a plastic spoon, cotton balls, a blue straw and .2 of a gram of methamphetamine. A plastic box with half a gram of marijuana was located in the center console, and a metal marijuana pipe was located in Trychel’s pocket.

Hammonds, who is pregnant, allegedly told the officer that the last time she had used meth was about four or five days ago. That timeline coincides with her arraignment in Graham County Superior Court from an Arizona Department of Public Safety case in which Hammonds is charged with possession of a dangerous drug and possession of drug paraphernalia. She ended up admitting ownership of one of the needles.

Montano, who was recently arraigned April 5 in Graham County Superior Court for possession of marijuana and possession of drug paraphernalia, claimed all the drugs and paraphernalia except one of the syringes were his. He said he and Hammonds were going to use meth one last time that night before quitting for good.

Hammonds was issued a citation for shoplifting, trespassing and possession of drug paraphernalia. The other men were advised the officer would send his report to the Graham County Attorney’s Office for charging. He then returned the stolen items to Walmart and placed the drugs and paraphernalia into evidence to be sent to the DPS Crime Lab in Tucson for testing. The three subjects were released at the scene.