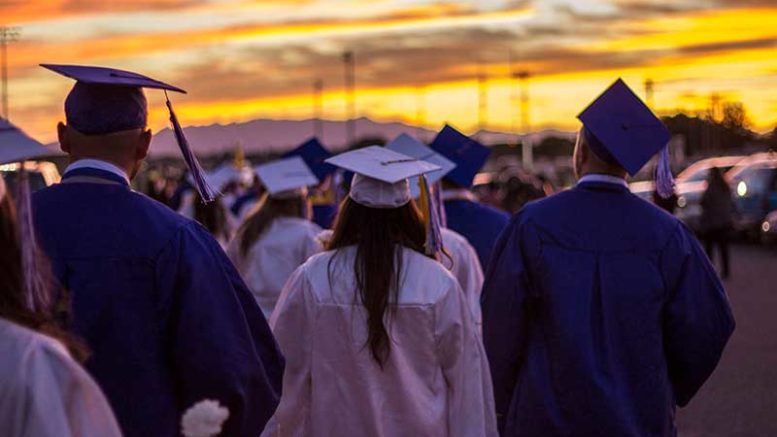 Brooke Curley Photo/Gila Valley Central: Safford graduates look to the future as the sunset casts a beautiful glow on their commencement ceremonies.

SAFFORD – Against a brilliant sunset in the distance, Safford grads collected their diplomas in style.

It was a lovely evening Friday when the Safford High School graduating students of 2017 received their diplomas in a sea of smiling caps and gowns.

Salutatorian David DeSpain addressed the commencement audience with solemn resolution with a speech depicting failure and success. DeSpain described an unfortunate hamstring accident that crippled the state championship in a relay event in the year of 2015. While DeSpain’s coach always encouraged the runners to stretch, DeSpain didn’t stretch long enough and injured himself. It was this taste of defeat that DeSpain said changed him and urged him forward to future triumphant years in state championship wins and medals.

“I would like to speak to you how failure really is a success,” DeSpain said. “A failure is a powerful tool in reaching great in success. In my life, I plan to pick myself up from my failures and use them to drive myself to success.” 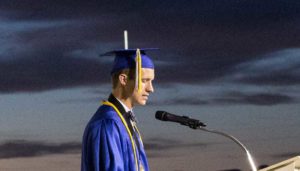 Valedictorian Alicia Clonts’s speech celebrated the past and held a joyous outlook for the future. Clonts began with the comedic story of the first time she and her cousin decided to run away from home at the age of 2, naked. Later, Clonts told the story of how, at the age of 4, she was daydreaming when her mother asked if she was in her own little world. 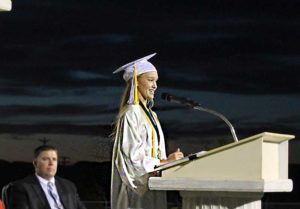 “My sassy 4-year-old response was, ‘It’s a big world, mom, and you can’t come,’” Clonts said.”Class of 2017, here we go. We are headed into a bright future to create our own legacies to make our own mark on the world. Take it from someone who already left home once, I highly recommend you wear clothes and shoes. After all, it’s a big world out there and our moms and dads can’t come.”

The Safford High School graduation commencement included victory dances, fireworks and selfies.  It was a beautiful evening for a graduation, and the 2017 class looked amazing in their caps and gowns as they took this large step toward the future.