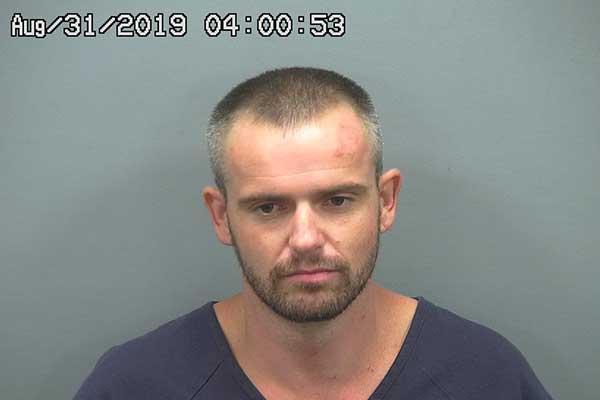 SAFFORD – Last Saturday at approximately 12:30 a.m. a Safford police officer on patrol observed a man on a motorcycle run a stop sign at the intersection of Relation Street and 8thAvenue. The motorcycle was traveling west on relation street and briefly slowed to about 10 MPH, then drove through the intersection.

The officer activated his lights and siren as the motorcycle approached Relation Street. The motorcycle did not stop at the four way stop and continued to accelerate. The motorcycle continued running stop signs in an apparent effort to elude the pursuing officers.

Other officers responded as they heard the pursuit in progress over the radio. The motorcycle traveled up 14thAvenue all the way to El Paso Boulevard. The officer pursued the motorcycle but briefly lost sight of it as it turned east on El Paso. When the officer approached El Paso Place, a dead-end cul de sac, the Motorcycle revved its engine and cut off the officer as it sped off eastbound on El Paso.

The officer continued to pursue the motorcycle as it traveled north on 8thAvenue. By this time, other officers and joined the pursuit. The motorcycle turned west onto Relation Street, running the stop sign as usual. The rider apparently lost control at 9thAvenue and laid the motorcycle down.

The original pursuing officer caught up to him and yelled for the motorcycle rider to get on the ground, but the suspect tried to run. In his effort to get away, he ran right into a group of law enforcement officers who had come upon him from the opposite direction. When he saw the officers in front of him, he tried running to his left and ran into the passenger side door of a Thatcher cruiser that had just arrived on the scene.

A deputy and Safford police officer took advantage of the sudden confusion as the man tried to recover from running headlong into the police cruiser and took the man to the ground. He continued to resist their efforts to subdue him and place him in handcuffs. The man, later identified as Timothy McClellan, was finally taken into custody near the intersection of 9thAvenue and 13thStreet.

An officer began searching McClellan incident to his arrest. McClellan told the officer not to search his right front pocket. A syringe was located in the pocket. He told authorities that he had found the syringe on the ground.

McClellan was transported to the Graham County Jail and booked for Reckless Driving, Possession of Drug Paraphernalia, Driving on a Suspended License and Felony Fleeing.

The officer later made contact with the owner by phone. The owner claimed that he had walked him from the American Club and last saw his motorcycle at his home in the backyard at 10 p.m. He admitted that he had been drinking but insisted that he did not know McClellan and he did not let anybody borrow the motorcycle. Two other officers overheard the conversation on speaker phone and reminded the motorcycle owner that they had seen him talking with McClellan and some other people on the corner of 6th Avenue and Main Street. The man the said that he did remember talking with those people but did not know them.

The officer contacted Graham County Dispatch to get a recording of the call the owner made to report the missing motorcycle. On the recording he told dispatch that he had loaned his motorcycle to a friend named Daniel and the friend had not returned the motorcycle.

After reviewing the call, a couple of officers went to the man’s house and told him what they heard him say to the dispatcher. He said that he did not know anybody named Daniel and continued to insist that he had not loaned his motorcycle to anybody. He did admit to being drunk the night of the incident and he couldn’t recall certain events. He also changed his story several times.

The police officers did not find his story credible and told him that it appeared that he probably did allow somebody to borrow his motorcycle and didn’t remember it because of his intoxication level. One of the officers had spoken to him at approximately 3:00 a.m. on the night of the incident and pointed out that he was extremely drunk.