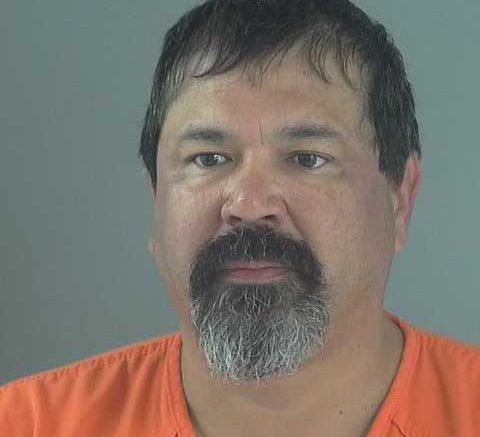 Contributed Photo/Courtesy GCSO: Jose Borjon was booked into jail after allegedly brandishing a gun during a domestic dispute.

GRAHAM COUNTY – A father was booked into the Graham County Jail early Sunday morning after allegedly brandishing a handgun during a domestic dispute.

Jose Borjon, 44, was arrested and booked into the jail on charges of disorderly conduct, criminal damage and disorderly conduct with a deadly weapon; all of the charges carry the domestic violence designation.

According to witness statements to authorities, Borjon and his family were at a party at a relative’s residence across the Gila River when he and his wife had a disagreement.

Upon returning home, Borjon’s wife attempted to leave but he stopped them and brandished a 9 mm Ruger handgun. The gun was later located in a laundry room by deputies, who found it with a fully loaded magazine containing 17 rounds.

Deputies were dispatched to the Borjon’s residence on South Yavapai Drive regarding a domestic dispute at about 12:28 a.m. Upon arrival, deputies located Borjon, his wife and two daughters. At that point, everyone was separated and interviewed.

Borjon’s wife said they had been drinking alcohol at the party and at some point Borjon began to accuse her of infidelity. He then allegedly  began to call her derogatory names, so she asked her daughter, who was their designated driver, to take them home.

Once back at her residence, she devised a plan for her and her daughter to leave, but Borjon became aware of her desire and initiated steps to thwart them, including sabotaging the garage door’s electronics so it wouldn’t open.

At that point, Borjon allegedly became irate and struck the family’s barbecue grill several times, causing it to dent. He also retrieved his handgun from near his bed and began to waive it around, according to witness statements. The mother and daughters didn’t believe the handgun to be loaded, but officers later discovered it was albeit no bullet was chambered.

While waiving his handgun, Borjon also allegedly threatened to shoot himself and pointed the gun at his own head. At that point, the Borjons’ eldest daughter called authorities.

Borjon told authorities that he had witnessed another man kiss his wife at the party, and that was what made him upset.

When they returned home, he noticed his wife and daughter packing up suitcases to leave and he began arguing with his wife about what car she could take. Borjon’s daughter also said the couple argued about whether his wife could take money or a credit card with her as well.

Borjon said he felt his family was gaining up on him, so he retrieved his gun and threatened to kill himself. He later told a deputy that he didn’t actually mean what he said and wouldn’t have injured himself or any members of his family. He also reiterated that he didn’t point the gun at anyone else but himself.

Borjon isa then taken into custody and transported to the jail.