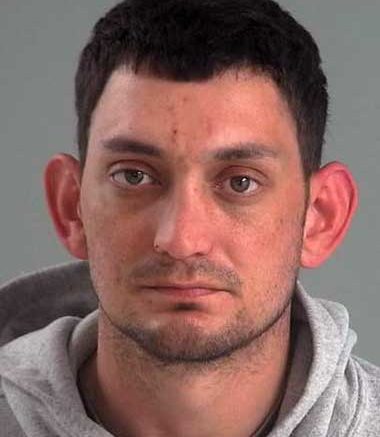 Contributed Photo/Courtesy GCSO: Michael Lucero was apprehended with heroin and drug paraphernalia after illegally parking in a handicapped space at Circle K.

SAFFORD – A man who illegally parked in a spot reserved for handicapped individuals was hit with instant karma as he was apprehended with heroin and other drug paraphernalia.

An officer was on patrol at about 12:40 a.m. on Monday, April 23, when he noticed two subjects walking away from a red Dodge Durango which was parked in a handicap space at the Circle K at the intersection of Relation Street and 1st Avenue. The Durango did not have a handicap license plate or placard.

When the subjects came back to the vehicle after completing their purchase inside the store, the officer questioned them about where they parked.

The driver, later identified as Michael Lucero, 30, of Safford, allegedly said he didn’t realize he parked in a handicap spot. When asked for his driver’s license, Lucero allegedly attempted to get rid of a glass methamphetamine pipe and was taken into custody. Officers also located a cut blue straw with apparent drug residue and a plastic container with .7 of a gram of heroin in Lucero’s pocket. A search of the car also yielded a digital scale.

Lucero allegedly admitted the pipe, heroin and cut straw were his and that he has a problem with using meth and heroin, but he denied owning the digital scale and said he was just a user and did not deal.

The second subject, identified as Ray Castillo, 52, denied knowledge of the scale. He was found to have a warrant for his arrest and was booked into the Graham County Jail.

Lucero’s father arrived at the scene to pick up the Durango, which is registered to him, and Lucero was released with him as well. The officer advised that the illicit items would be tested by the Arizona Department of Public Safety’ Crime Lab and a report would be sent to the Graham County Attorney’s Office for review and charging.