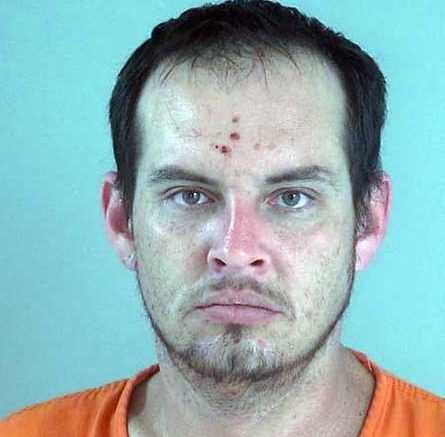 Contributed Photo/Courtesy GCSO: John Cordova was booked into jail on drug and trespassing charges after a domestic dispute led to the seizure of a small quantity of heroin and drug paraphernalia.

SAFFORD – A Safford man was booked into jail Monday after a domestic incident led officers to locate heroin inside his backpack.

John Michael Cordova, 33, was arrested and booked into the Graham County Jail on Monday on charges of possession of a narcotic drug (heroin), possession of drug paraphernalia and trespassing in the first degree.

Officers initially encountered Cordova when they were dispatched to a residence in the 1300 block of South 11th Avenue in the late afternoon. Upon arrival, a female occupant told officers that Cordova didn’t live there and she wished him to never return.

Officers informed Cordova that he was trespassed from the residence and that he would be arrested if he returned. They then let him go on his way.

Less than 45 minutes later, however, the victim called police and informed them that Cordova had returned.

Officers went back to the residence and located the woman hiding in the backyard, allegedly stricken with fear of Cordova.

The suspect himself was not located on the property but was found walking north on 10th Avenue, just north of 10th Street, according to a Safford Police report.

Cordova allegedly admitted going back to the residence but said he only did so to retrieve his wallet. He was carrying a backpack he previously didn’t have and asked the officers if they would take it to his residence if he was going to be arrested.

Instead, the officers searched the backpack and located a small quantity of heroin, a used syringe, a silver spoon with apparent drug residue and numerous small baggies with apparent methamphetamine residue.

While Cordova complained about the officer’s right to search his backpack, he allegedly admitted all the contraband found inside was his.

He was then transported to the jail and booked on drug and trespassing charges.