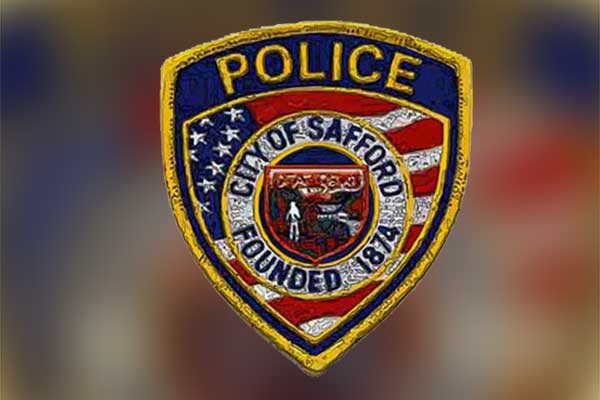 A Safford police officer was dispatched to a bank in Safford on Thursday, February 6, 2020 at approximately 1:30 p.m., in response to a customer who was acting disorderly. When the officer arrived, bank employees said that a man identified as Andrew Jackson Gilbert had come to the bank to get cash. He had initially used the ATM outside the bank but then went inside to complain that he did not get $40 out of the ATM.

As employees attempted to help Gilbert, he reportedly started yelling and causing a scene inside the bank. He was apparently pounding on the desk and pacing around in an aggressive manner. At one point Gilbert threw his ATM card at an employee. The officer asked if the bank wanted to place Gilbert on the trespass list. Bank officials said that they were going to close Gilbert’s account. and no longer carry him as a customer.

After leaving the bank, the officer received a call that Gilbert was harassing construction workers at the Mount Graham Shopping Center. Officer’s responded to the area but were unable to locate Gilbert. The reporting party told authorities that Gilbert had arrived in town that morning and was said to be out of money and might be looking for drugs due to withdrawals.

At approximately 2:30 p.m., a bank employee called authorities to report that Gilbert had returned to the bank and was, again, causing a scene. Gilbert fled on foot when he learned that the bank had called police. An officer in the area spotted a man matching Gilbert’s description walking onto the Catholic church campus. The officer went to the restroom area and saw Gilbert coming out of the men’s restroom.

The officer ordered Gilbert to turn around and put his hands behind his back. Gilbert initially complied but when the officer went to place him in handcuffs, Gilbert took off running. The officer chased him down and tackled him to the ground. Another officer arrived and helped place Gilbert in handcuffs. Gilbert was booked into the Graham County Jail for disorderly conduct.

After leaving the jail, and officer returned to the bank and spoke with an employee about the incident. She said that when Gilbert came back in, she asked about the $40 he had complained he didn’t get out of the ATM. Gilbert apparently admitted that he had received the money. The employee told him that they were going to close his account and sever their relationship with him. Gilbert became upset again and began cussing. He was pacing in and out of the bank when the employee called the police. When he realized the police were coming, he fled.