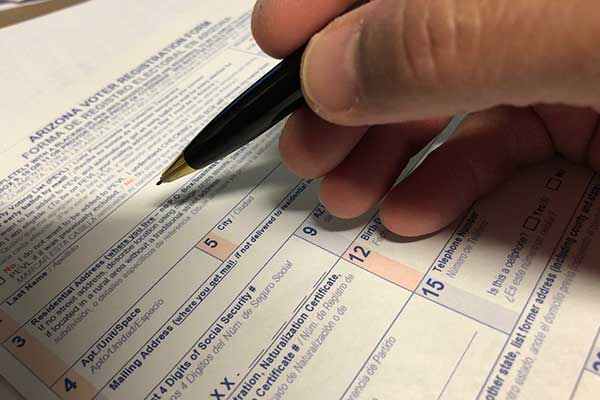 Phoenix– Voting-rights advocates are claiming victory after the state of Arizona agreed to make it easier for residents to exercise their right to vote.

A lawsuit filed by the League of Women Voters of Arizona, the Mi Familia Vota Education Fund and Promise Arizona has just been settled. The groups alleged that the Arizona secretary of state was violating the National Voter Registration Act by not updating voter registrations when Arizonans update the address on a driver’s license.

“When you changed your address online through the ADOT online services,” she said, “there was very minimal information about voter registration, and no real meaningful explanation that you had to take extra steps to update your voter registration.”

Barnham said the settlement is particularly important in a state such as Arizona, where a high percentage of voters use mail-in ballots. When voter registrations don’t have a current address, she said, the ballots are likely to be mailed to the wrong place. Having the wrong address on your voter registration also can cause problems for people who vote at their local precinct,” she said.

“If you’re voting in person in Arizona, the rules about where you can vote are fairly restrictive,” she said, “and if you vote in the wrong place — basically, say, out-of-precinct — you are able to vote a provisional ballot, but it will not be counted.”

Barnham said she is convinced the settlement will help ensure that every vote counts for a large number of Arizonans who might have otherwise been disenfranchised.

“Testimony that was presented at the hearing from the state suggested that almost 400,000 people in Arizona had a mismatch between their voter registration address and their Department of Motor Vehicles’ ADOT address.” she said.

Congress approved the so-called Motor Voter Act in 1993, but advocates have said it has taken Arizona 24 years and a federal lawsuit to finally comply with the law. The state’s next election is the March 17 Democratic Presidential Preference vote. Feb. 18 is the voter-registration deadline for that ballot.

The text of the settlement is online at acluaz.org.