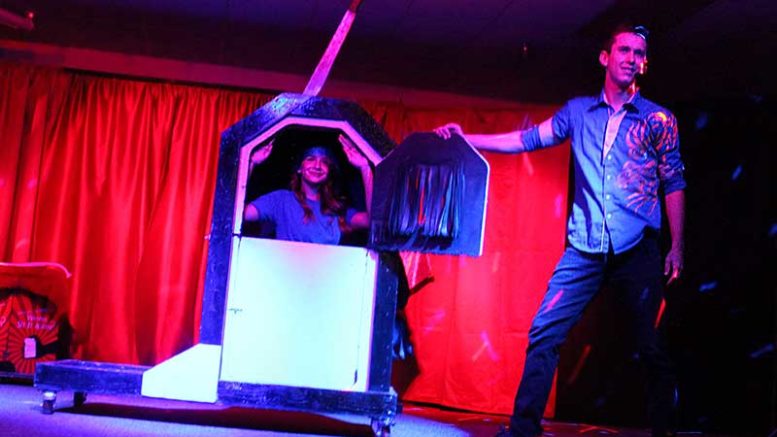 Brooke Curley Photo/Gila Valley Central: Samuel Siminoe stabs a box holding his assistant with knives, and then dices it into multiple parts before returning the box and his assistant back to normal.

SAFFORD – Charming and lovable, Samuel Siminoe entertained the local crowds once more with his particular brand of illusion and humor at the Safford City-Graham County Library on Wednesday.

Siminoe, 16, filled the library with the promise of fun and magic. His younger-children friendly show was at 10:30 a.m., while his show geared toward the older individuals was later that day. Siminoe’s illusions included running volunteers through with knives, cutting his assistants into multiple sections, and turning doves to kittens. However, it isn’t only his illusions that create his appeal, but the fact that Siminoe has become such a local success story. Working all over the state, Siminoe’s career includes a performance on the television show America’s Got Talent. Siminoe not only credits his family and friends for his success but also the library for helping him as one of the entities that launched his exciting career.

“I’ve been doing this show (at the library) for four years, and I was fortunate enough to even get a show when I got it,” he said. “I didn’t have anything, I was just a kid doing magic, that’s it. I was fortunate to get the show. When I grew up, and I kind of grew out my business reached out and got the bigger shows, this is one of the places that helped me get where I’m at.” 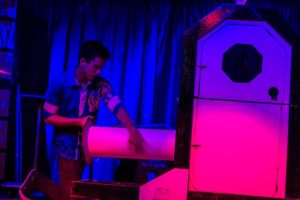 Although Siminoe loses money on production costs each year to perform for the library, he still does it a show of gratitude. When he started performing at the age of nine, the Safford Library was one of the first to acknowledge and give his talent a chance.

“I lose money on it every year, but I have to do it because I wouldn’t have anything without this show,” Siminoe said. “Without doing this every year for them, I would have nothing.”

Siminoe’s next show location is at a winery in Show Low and will be massive in comparison to the library’s performance. However, his next local illusion show will be at the Graham County Fair. Siminoe also credits the hard work of his family, friends and assistants, Ellah Layton and Maliya Billingsley. Layton and Billingsley told Gila Valley Central that they delight to see the crowds, meet interesting new people, and entertain the people they can in the way they can. 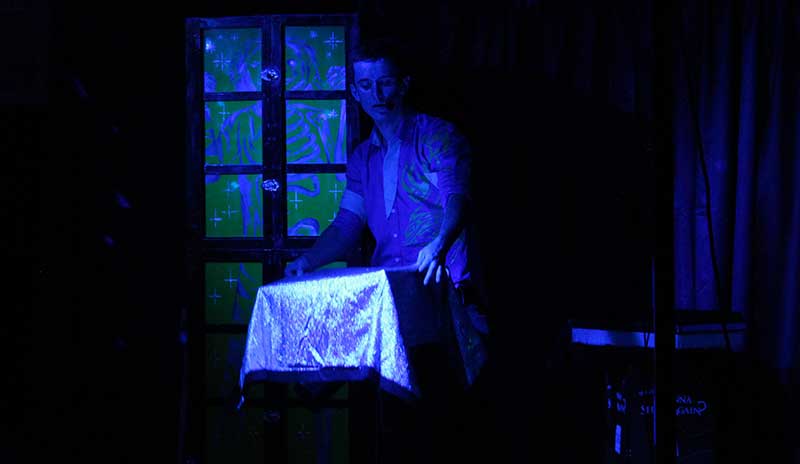 Brooke Curley Photo/Gila Valley Central: Siminoe is readying the crowd to be awed when he makes an entire cage and two doves disappear.

Library Director Leanne McElroy told Gila Valley Central that the library greatly appreciates Siminoe’s willingness to come and perform for multiple reasons. She points out the fact that a young person in the Gila Valley is doing what they love to do and succeeding is a role model to the young public, and McElroy appreciates that example.

“We love having Samuel in here, not just because he’s a fantastic magician but I think it’s really inspirational for kids in the area to see him following through on a dream,” McElroy said “And his dream started with books and that makes us love it even more. The kids really become excited about the idea of someone here locally who has been able to follow their dream, and it’s somewhat of an unusual career choice. And who doesn’t love a magic show? We were thrilled to have a full house and overall we are very pleased. What a great way to end the summer.” 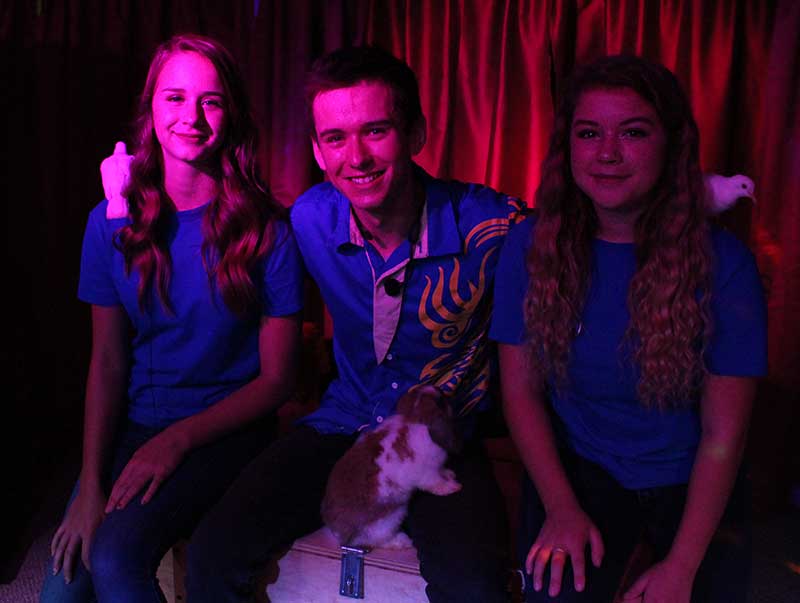 The illusion show was the big bang of an end to the summer at the Safford Library, which celebrated over 11,000  item check-outs in the month of June alone. Over the course of the year, the Safford Library has held a multi-cultural event, a karate demonstration, and a Zumba class.

Local teen and illusionist talent to travel to Ukraine