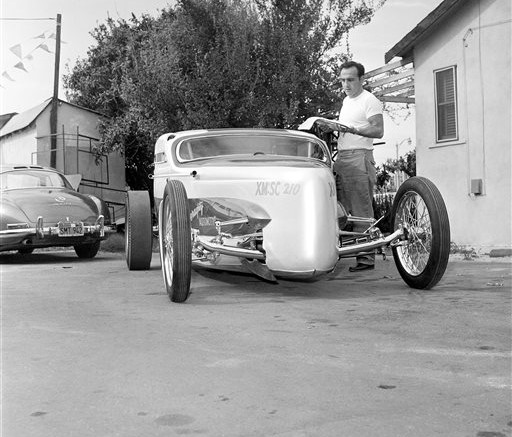 FILE - In this Feb. 28, 1961 file photo, after three years of work, George Barris of Lynwood, Calif., has done a masterful job of converting a 1931 Model "A" coupe into a 500 horsepower hot-rod. Standing beside his converted hot-rod, Barris raises one of the car's lift-up type doors. Barris, the legendary custom car builder who created televisions original Batmobile, and who helped define Californias car culture for the rest of the world with scores of colorfully designed vehicles that ranged in appearance from the stunningly beautiful to the simply outrageous, died Thursday, Nov. 5, 2015. He was 89. (AP Photo/Ellis R. Bosworth, File)

Barris, who had been in declining health, died at his Los Angeles home with his family by his side, said Edward Lozzi, his longtime publicist and friend. No cause of death was given.

Barris customized cars and buses for TV shows, movies, celebrities and heads of state and was a pioneer in designing small, plastic models of those customized cars. The models popularized his wildly imaginative vehicles all the more when they were assembled by millions of American youngsters in the 1950s, ’60s and ’70s.

“He was the man who started the American pastime for Baby Boomers,” Lozzi said.

For decades Barris worked out of a shop in a modest North Hollywood neighborhood, just down the street from Universal Studios. Passers-by would often be startled to see the Batmobile or another stunning vehicle sitting inside the shop and to meet Barris if they strolled in to check it out.

Barris also worked on The Munster Koach for the 1960s TV show “The Munsters,” and “Black Beauty,” the car Bruce Lee used in the TV show, “The Green Hornet.”

Born in Chicago on Nov. 20, 1925, to Greek immigrants James Salapatas and Fanicia Barakaris, who later Americanized the family name to Barris, George was 3 when he and his older brother, Sam, moved to Roseville, California, to live with their aunt and uncle after their mother died.

Barris would say years later that they customized their first car as teenagers — a 1925 Buick they were given for helping in the family restaurant. They sold it and used the money to work on another.

After fully customizing a 1936 Ford in high school, Barris formed the Kustom Car Club. The unusual spelling of “custom,” never fully explained, came to be his signature.

The brothers, meanwhile, moved to Southern California after World War II and began designing cars for private buyers. Their colorful, sometimes outlandish refurbishing of convertibles, coupes, sedans, hot rods, even lowrider cars soon brought them to the attention of Hollywood.

Their clients came to include Frank Sinatra, Elvis Presley, Burt Reynolds, Sylvester Stallone and numerous other celebrities and studio executives.

For a brief time in the 1940s, Barris also raced his cars at speedways but gave it up when it took too much time from his customizing work.

After Sam Barris left the business in the 1950s, George and his wife, Shirley, continued on their own.

His most famous creations, such as the Ala Kart and the Hirohata Merc, remain instantly recognizable on the car collector circuit to this day.

The most famous of all, the Batmobile, built from a refurbished 1955 Lincoln Futura, sold at auction two years ago for $4.2 million.

Barris, meanwhile, remained active until recent months. He and his son, Brett, took part in a signing last summer at a Los Angeles car dealership for their recently published book, “King of the Kustomizers: The Art of George Barris.”

In addition to his son, Barris is survived by his daughter, Joji Barris-Paster, and a grandson. Barris was preceded in death by his wife.