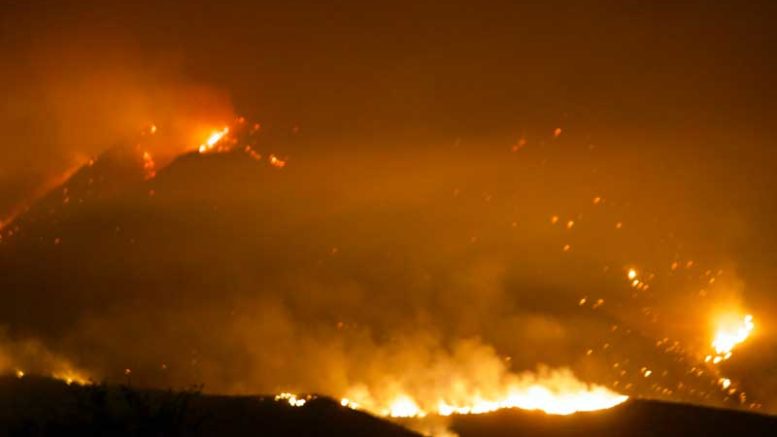 MOUNT GRAHAM – The lightning-caused Frye Fire continues to spread southeast toward Turkey Flat aided, in part, by blowing winds as crews now have to deal with additional fires started by lighting.

The Frye Fire has expanded to 21,335 acres and has been downgraded to just 10 percent containment due to the increased size. Additionally, new fires have been ignited near Fort Grant and in the Kane Springs Mountain area.

The fire expanded on its eastern front on what was believed to be aerial ignition, but Forest Service representatives now say the cause of the expansion was solely due to weather conditions and no aerial back burning occurred, in opposition to what firefighters reported to Gila Valley Central. 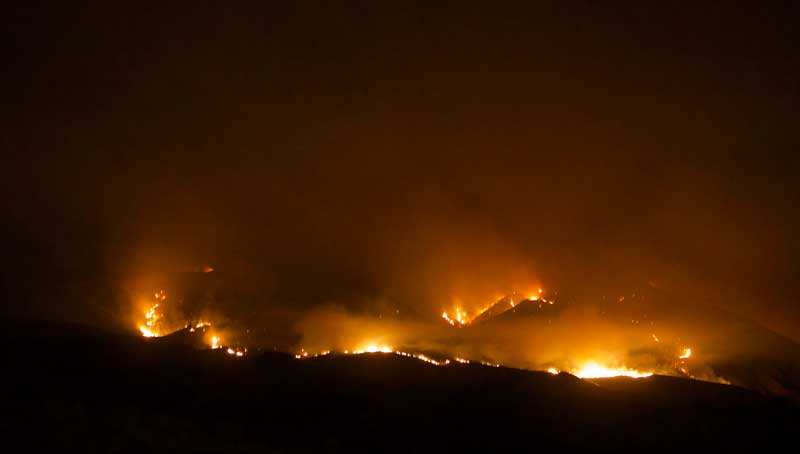 The aerial ignition is one of the strategies to fight fire with fire in the Forest Service’s attempt to thwart the blaze before it hits the Turkey Flat area, where there are approximately 71 cabins at risk. Some measures have been installed to protect the cabins, including installing nearly 15,000 feet of hose in a sprinkler system to water down the area, and more is to come, and will fill 13 “pumpkins” at Turkey Flat. The pumpkins had thousands of gallons of water.

However, one firefighter, who spoke on the condition of anonymity, said the protections for Turkey Flat are lacking and that a back burn wasn’t supposed to start until all protections were in place. He also said he was disheartened because they grounded all aircraft last night until further notice so they could check paperwork on the machines.

“They just lit off the whole entire front side of the mountain, the back side of the mountain is getting ready to go up and this wonderful team of ours has just grounded all our aviation resources to help save our mountain,” he said. “This is about to get bad . . . I’ve never hear of them grounding aircraft to check paperwork. There’s something weird going on here.”

After initially corroborating the back burn, Forest Service representatives said all of their aircraft were grounded Wednesday due to weather conditions, it being too hot or due to thunderstorm activity, and no aerial back burning operations took place. 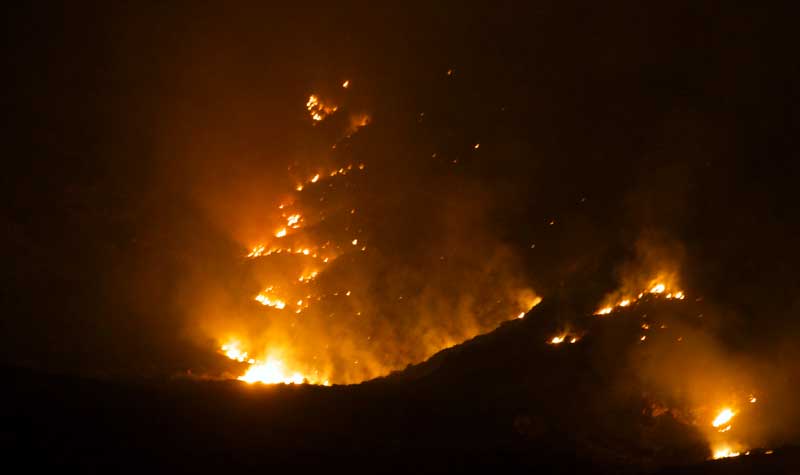 Jon Johnson Photo/Gila Valley Central: The fire meanders its way up the hillside.

Eck said the back burn effort is a strategy to lessen the intensity of the fire by burning the top of the ridge and let the fire burn back down. He also added that no aircraft were grounded to check paperwork.

“It’s a slower fire, which is better for the environment,” Eck said. 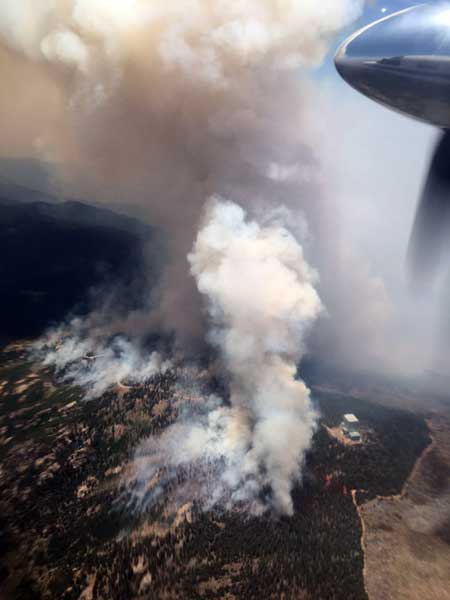 The firefighter said while the sprinklers were installed at Turkey Flat, no other prep work was completed prior to the back burn of Marijilda. He said there were no dozer or hand lines and that retardant wouldn’t be available because the plane that drops the retardant is now elsewhere. He also added that the only place that received retardant for the whole fire was the Mount Graham International Observatory (MGIO).

“Things have been going good, and now we’re gone,” the firefighter said. “We’re done. There’s no stopping this. With the amount of fire they put down with that helicopter – in my 14 years of fighting fires, this is unfathomable. This is the most fire I’ve ever seen laid down with no prep work. This is putting a loaded gun in my mouth and pulling the trigger; you know the end result.”

After the article was published regarding the firefighter’s statements, Eck informed Gila Valley Central that no back burn had occurred on Friday and the increase of the fire on the eastern flank was entirely due to wind and other weather conditions. 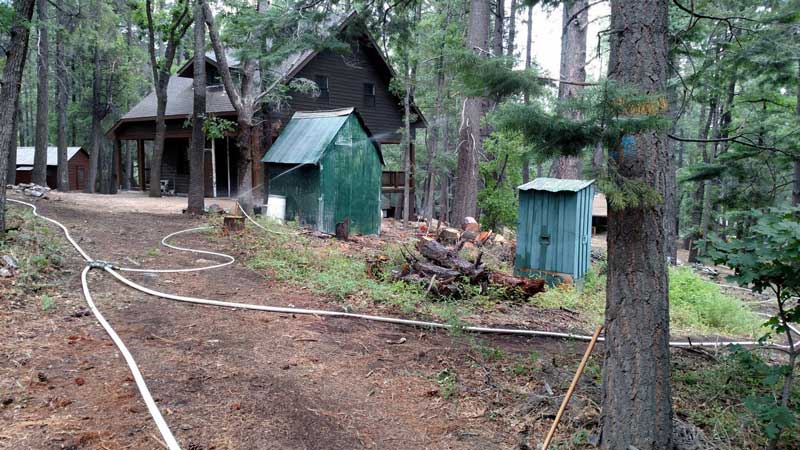 However, according Eck, the only thing stopping air support would be the heat and two helicopters were staged on Mount Graham itself instead of out at the Safford Regional Airport to take advantage of cooler temperatures. Helicopters have been grounded during the recent heat wave, as the maximum operating temperature was set at 110 degrees.

Lightning started several grass fires near Fort Grant on Wednesday and fire crews working the Frye Fire responded and put them out. 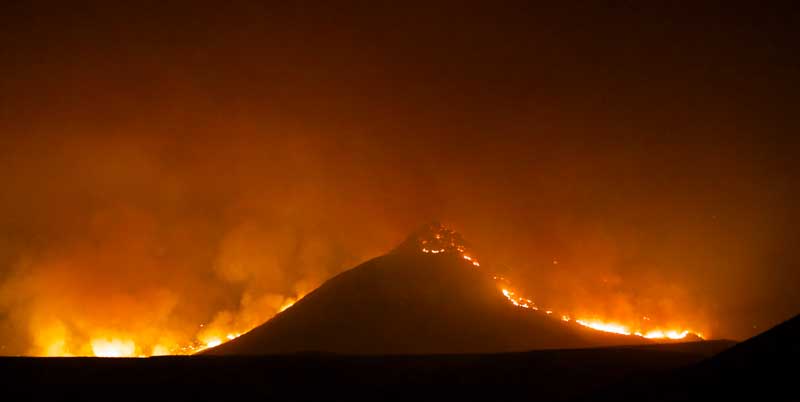 The fire swept through the area that includes the MGIO, Bible Camp, Columbine and cabins at Old Columbine and those assets were protected through a variety of suppression techniques, including water drops from helicopters, burn back efforts, sprinkler systems and, in the case of the MGIO, fire retardant drops. The fire has now passed over those assets and firefighters remain to mop of hot spots and keep the area secure while monitoring the fire.

The fire crossed Highway 366 a couple of days ago after downdrafts blew “the fire all over the place”, according to Southwest Area Incident Team 3 Incident Commander Arthur Sinclair.

He said the strategy was to ignite the hill sides by aerial means to lessen the fire’s impact climbing uphill and have firefighters fight the blaze at lower elevations, where their tactics are more successful. 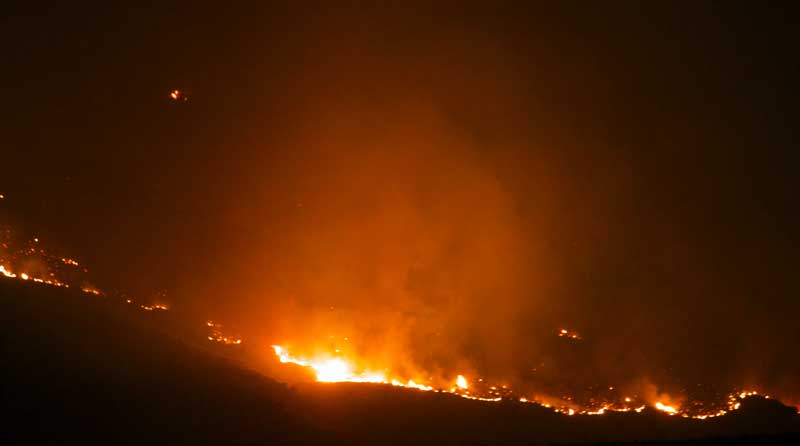 Jon Johnson Photo/Gila Valley Central: The Frye Fire heads down toward Daley Estates in this picture. Hot Shot crews are stationed at the base of the mountain to battle the flames when they reach the bottom.

“We are going to monitor the fire, engage it in areas where we need to and keep our crews safe down below in the low lands,” Sinclair said in a fire briefing video. “Safety is the number one priority that we have for our firefighters, and we are going to make safety-based decisions. And the decision to disengage up here, allow the fire to do what it is going to do (and) minimize high-severity fire effect where possible is making good, safe decisions . . . It’s going to take patience to wait and see what this fire does. We’re going to be patient with the fire and we are asking you to be patient with us.”

The firefighter who spoke on the condition of anonymity questioned why retardant drops weren’t done elsewhere on the fire and instead the plane, which was stationed in Phoenix has now flown to fight fires in Utah and New Mexico.

The Frye Fire was started by lightning at 2:45 p.m. on June 7 and now costs $1 million per day to fight.