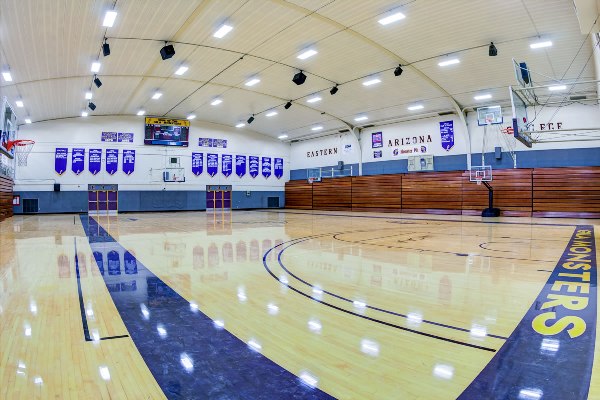 It’s been more than a year since the Eastern Arizona College basketball programs have played a true home game. After a busted pipe and subsequent flood drove the Monsters hoops teams to play home games at local high schools, they return to ACCAC conference action tonight hosting Scottsdale.

The Eastern Women have finished their non-conference schedule with an impressive 6-1 record. The Lady Monsters averaged nearly 83 points per game. EAC is led in scoring by Danja Stafford, a 6’1″ freshmen from Orem, Utah. She averages 13.7 points per game. Susi Namoa, a 5’9″ freshman from Lahaina, Hawaii chips in 10 points per game. They tip off tonight at 5:30pm against the Lady Artichokes of Scottsdale.

The EAC Men will tip immediately following the women’s game on 7:30pm. This matchup will feature the only two undefeated teams in the league. EAC comes in to the conference opener 7-0 and Scottsdale sits 4.0. The Gila Monsters are led by Nate Pollard, a 6’6″ sophomore from Richmond, Virginia. Pollard averages 16 points and 10 rebounds per game. Jalen Brown(16), Ty Rankin(14), Anthony Anderson(12) and Drake Gunn(10) have all averaged double digits in the impressive non-conference run. The Gila Monsters will have to find an answer for Xavier Fuller. The Scottsdale guard has averaged 25 points per game while hitting 52% from behind the arc.