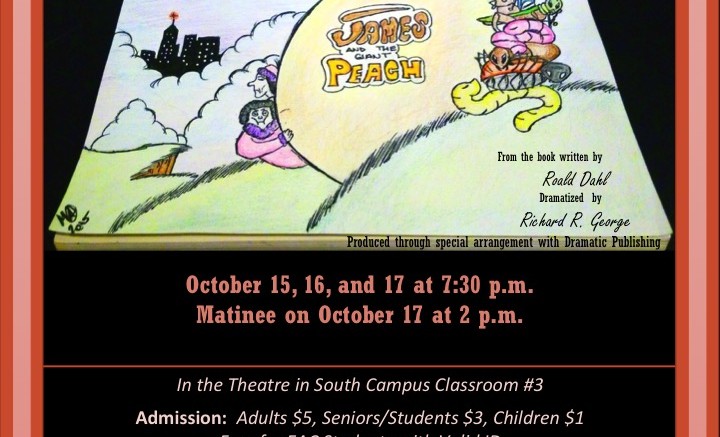 October 8, 2015By Richard HovelsrudEastern Arizona College’s Repertory Acting Company to present James and the Giant PeachA one-act play to excite the imagination!THATCHER, AZ—Eastern Arizona College Repertory Acting Company, by special arrangement with  Dramatic Publishing, is pleased to present James and the Giant Peach. This one-act play will be performed on Thursday, Friday, and Saturday evenings, October 15 – 17.  Each performance will begin at 7:30 p.m. and will be held in the theater in South Campus Classroom #3.  There will also be a matinee performance on Saturday, October 15, at 2 p.m.Tickets can be ordered in advance by calling the EAC Ticket Office at (928) 428-8228.  Admission is $5 for adults, $3 for seniors and students, and $1 for children; EAC students with a valid ID are admitted free of charge.Based on the widely-acclaimed children’s book by Roald Dahl, James and the Giant Peach is a story of fantasy and fun which focuses on a boy named James Henry Trotter.  After the tragic loss of his parents to an angry rhinoceros, James is sent away to live with his two horrible aunts and he is miserable. One day, an old man shares a magical gift with James which unexpectedly sets an amazing adventure in motion.  James is swept away from his aunts’ home on a giant peach with a motley crew of oversized insects – including a singing centipede, an old green grasshopper, a ladybug, a pessimistic earthworm, a sleepy silkworm, a brilliant glow-worm, and a web-spinning spider.  A charming narrator guides the audience as James and his new friends brave land, sea, and air on their remarkable journey.“This inspiring, sometimes treacherous, but ultimately happy story is a joy for children and adults alike,” said EAC Drama Director Steven Higginbotham.This production will be presented by the Repertory Acting Company at Eastern Arizona College, a course designed to give students the opportunity to work within a structure modeled after professional theatre companies and run by an ensemble of members.  This semester, members of “The Rep” include Mason Bennett, Kobie Bigelow, Lizzy Dannenbrink, Sarah DeHaven, Daken Hawkins, Richard Hovelsrud, Kiana Matthews, Dylan “Albie” Prentis, Shaelee Riding, Kylie-Jo Soto, Ashleigh Stapley, and Steven Watson.Higginbotham said, “The members of this company continue to amaze me – their imagination, creativity, camaraderie, and enthusiasm come together to make this a wonderful show which is sure to charm audiences of all ages.”EAC’s Repertory Acting Company invites you to escape reality and come along with us on this magical journey with James…and a giant peach!  Bring your family, friends, kids, and imagination with you!