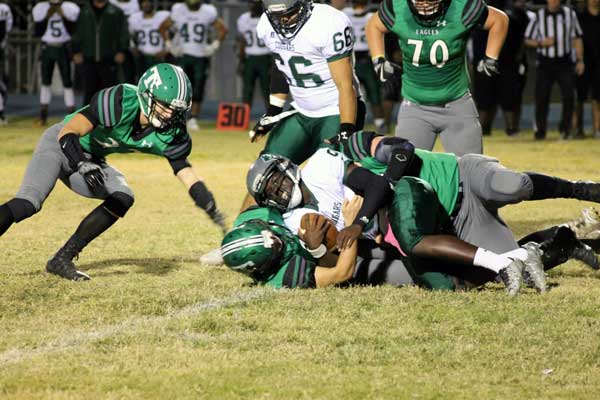 L. Scott Bennet Photo: Phoenix Christian's Tylin Rodgers gets enveloped by Thatcher's defense. The Eagles advanced to the state semifinals with a 52-6 victory over the Cougars.

The No. 6 seed Phoenix Christian Cougars traveled to the Gila Valley to take on the No. 3 seed Thatcher Eagles in the State 2A quarter finals Saturday night.  While the game was played in Safford, it was owned by Thatcher all night.  The Cougars, which proved unable to consistently stop the high-octane Thatcher offense, were eliminated from championship contention after losing to the Eagles, 52–6.

Thatcher started quickly and did not look back.  After forcing the Cougars to punt on their first possession, Thatcher went for it on fourth and 3 near midfield.   The Eagles’ dive was sustained when Phoenix Christian jumped off sides. Two plays later, senior Brandon Hayes scampered for 15, and the Cougars gave the Eagles another 15 when Hayes was hit out of bounds.  On first down, senior quarterback Jake Dunlap hit junior Tyler Roebuck for a 7-yard TD pass.  Going for two, Dunlap rolled out to find sophomore Cole Motes for the successful conversion.  With 6:48 left in the first, the Eagles were up 8–0.

The Thatcher defense, which played near flawless football all night, once again forced a Cougar punt on their second possession.  Sophomore Riley Morris was able to get past the Cougar line and block the punt, which gave the Eagles the ball at the Phoenix Christian 45.  Dunlap, after a long run to the Phoenix Christian 1 yard line, called his own number and took it in for the score.  Going for two, Dunlap pitched the ball to senior Nathan Lee who extended Thatcher’s lead to 16-0. 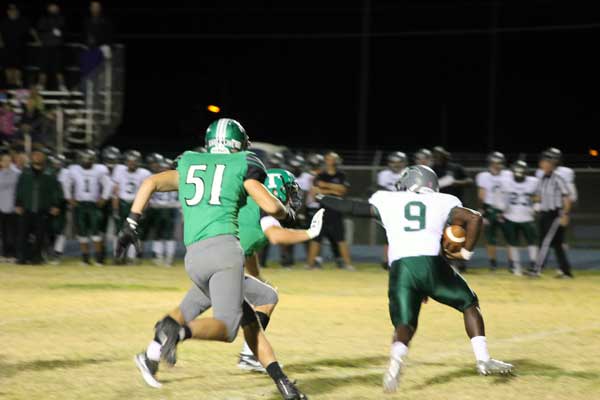 The Cougars appeared to get back in to the game late in the second quarter.  After forcing the first Thatcher punt of the night, Phoenix Christian moved down to the Thatcher 20.  Unfortunately for Cougar fans, Phoenix Christian self-destructed when Thatcher junior Jordan Herbert picked off Phoenix Christian quarterback Tylin Rodgers.  Herbert returned the intercepted pass 77 yards for a Thatcher score.  Hayes took it in for the conversion, and the Eagles extended their lead to 24–0.

The Eagles would find the end zone one more time before the half.  After getting the ball back, Dunlap, running the two-minute offense, marched the Eagles down the field.  On third and goal form the five, Dunlap, who had the pocket collapse on him while trying to find an open receiver, rolled out to his right and once again took it in himself.  Only going for one, junior Tormod Sandven drilled the PAT to give the Eagles a 31–0 halftime lead. 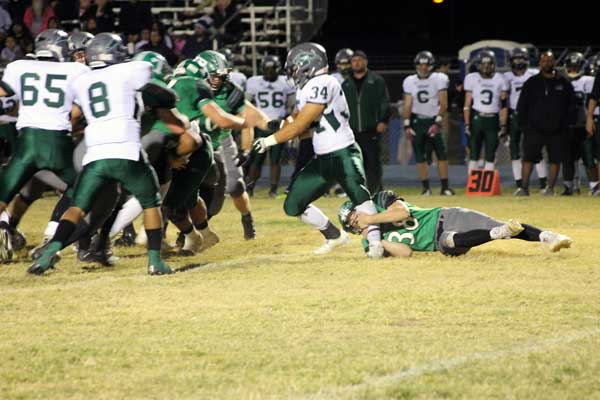 Thatcher would find the end zone three more times in the second half.  Senior Corbin Brown, who also played brilliant defense all night, took one in early in the third quarter.  Nate Lee crossed the goal line again, but this time for a TD at the midpoint in the third.  Finally, sophomore Brock Jones put the only fourth quarter points on the scoreboard and secured the Eagles’ win, 52–6. 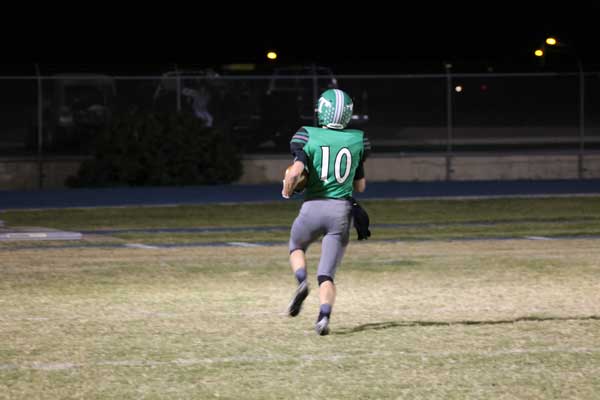 L. Scott Bennett Photo: Thatcher’s Aric Peterson (10) heads off to the end zone without a defender in sight.

“That’s about what we thought would happen, actually,” Hinton said. “We felt we were ready.  The boys worked hard as they have all year long.”

Coach Hinton went on to explain that his team is “peaking at the right time.”  Finally Hinton added that he was looking forward to the match up next week against Santa Cruz Valley (Eloy).

With the win, Thatcher advances to the State semifinals where they will take on No. 2 seed Santa Cruz Valley, who is undefeated at 11-0. Santa Cruz defeated No. 10 Scottsdale Christian 62-21 to advance to the semifinal.

The teams will meet Saturday at Fountain Hills High School in Phoenix at 2 p.m.  Should the Eagles win, they will advance to the State Championship game to take on the winner of the Round Valley and Benson game. No. 1 seed Round Valley beat No. 10 seed Paradise Honors 45-0 and No. 5 seed Benson upset No. 4 seed Pima 35-20 to advance to the semifinals.