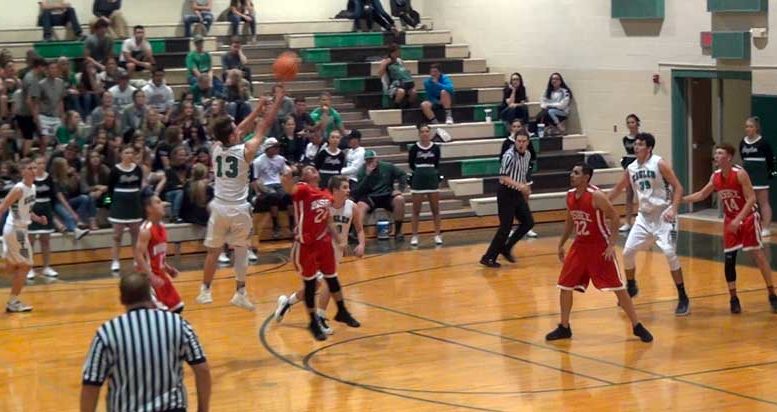 Jon Johnson Photo/Gila Valley Central: Brock Layton puts in three of his team-high 19 points on his way to help Thatcher with its opening season win over Bisbee, 82-71.

THATCHER – The Thatcher Eagles (1-0) were rusty in the first period and fatigued in the fourth period, but that was to be expected being the first game of the season and with a good portion of the team only having two days of basketball practice coming in fresh off their football state championship. But it was an extraordinary third period in which the Eagles outscored the visiting Bisbee Pumas 31-5 that was the difference.

On the success of the third period, the Eagles fended off a rally by the Bisbee Pumas (0-1) in the fourth to give a victory to their fans and a season-opening win for new head coach Chris Riehemann, 82-71.

“It wasn’t pretty all the time, but I thought it was a gutsy performance from our kids, especially the guys who just came off the football field two days ago,” Riehemann said.

The bigger Eagles outrebounded the Pumas, 46 to 28, with 21 offensive rebounds. Both teams were sloppy with the ball, however, with Thatcher turning it over 27 times on the night and Bisbee 23.

The game opened with each team turning the ball over before Bisbee’s Francisco Urcadez completed an and-1 opportunity to break the ice with a layup and free-throw. Urcadez ended up with a game-high 20 points on nine field goals and 2-3 from the charity stripe. He was held scoreless, however, during Thatcher’s big third period. 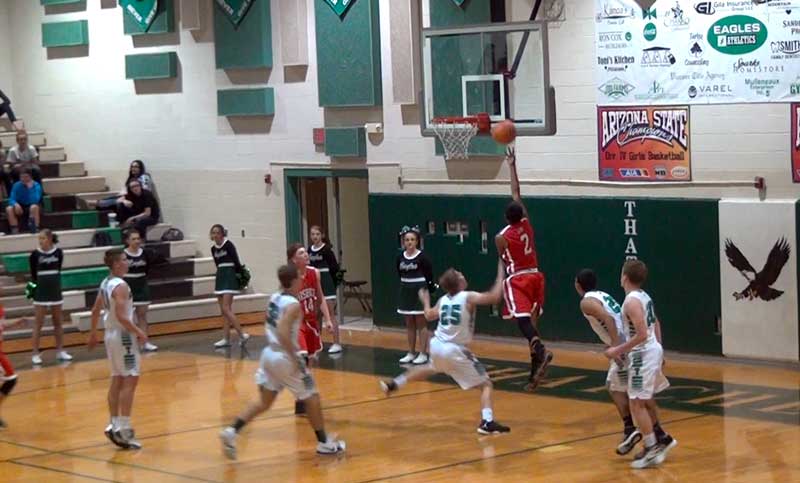 Thatcher tied the game at 12 later in the first period, but Urcadez came right back with a sweet crossover that he finished with a layup to retake the lead. Then it was sophomore David Ballesteros’ turn to show off his ball-handling abilities as he crossed up his defender and laid it up high off the glass for two, and the Pumas led after one period, 18-14. Ballesteros would finish with 16 points on the night.

Eduardo Vasquez hit a 3-pointer in the second quarter and the Pumas extended their lead to 21-14 with 6:34 left until half.

That’s when Brock Layton started to heat up. After being held scoreless in the first period, Layton hit two 3-point buckets in the second period on his way to leading the Eagles with 19 points on the night on six field goals (four 3-pointers) and 5-9 from the free-throw line. Three other Eagles also scored in double figures, including Trenton Ferrin and Cole Motes with 14 each and Matt Palmer with 12.

“My team helped me out a lot,” Layton said. “They were there for me and got me the ball when I was open.”

The Pumas battled back, however, and Bisbee soon amassed its biggest lead of the night, 28-18 with 4:32 left in the second period.

The Eagles went on a 12-2 run to tie the game at 30 with 2 minutes left in the half. It was a good run aided by offensive putbacks by the Eagles.

The teams traded buckets and it took a contested shot by Jordan Lopez to put the Pumas up one, 35-34 at the break.

In the third period, Thatcher’s defense held Bisbee to only one made field goal in the opening minute of play and to just 5 points while the Eagles exploded for 35. Thatcher was hitting on all cylinders as the deep ball went down five times and the Eagles had layups on multiple fast breaks initiated by turnovers.

“They got a little tired,” Bisbee head coach Mike Hernandez said. “They had a good fight. They didn’t give up, so I was proud of them.” 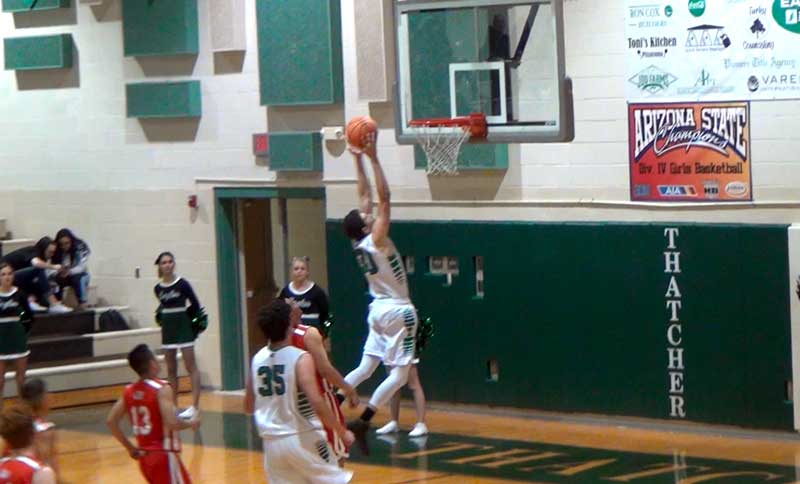 The Pumas fought back in the fourth period, turning the tables on Thatcher and scoring layups off turnovers, but their 31 points in the period couldn’t make up the difference and Thatcher cruised to victory, 82-71.

“We were a little bit sloppy in the fourth quarter, obviously, and I think a lot of that is just the fatigue factor that sets in,” Riehemann said. “We’re not quite in basketball shape.”

Riehemann said he plans to work his team this week to get ready for the rivalry game with Safford on Dec. 5.

“Safford will be fun,” Riehemann said. “It doesn’t matter if it’s ping pong or air hockey, it’s Safford and Thatcher going together. It’s going to be an entertaining evening.”