THATCHER – In a rematch of the 2016 2A State Championship game, the undefeated Round Valley Elks (5-0 conference, 8-0 overall) came to Thatcher looking for a little payback against the Eagles, the team who beat them for the State title last year. While the war is far from over and will be decided in the playoffs, the Elks won the battle Friday night, sneaking out of Thatcher with a slim 20 – 6 win over the Eagles (5-1 conference, 7-1 overall). 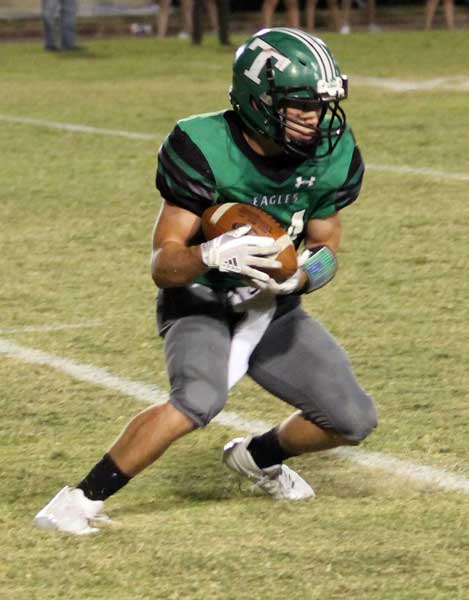 Round Valley took the ball to start the game, and what initially appeared to be an impressive opening drive was quickly stifled by the lockdown Eagle defense, which forced the Elks to punt.

The Thatcher offense started a bit sluggish. After beginning their opening drive on their own 9, the Eagles were pushed back on consecutive plays. On third and long, much to the dismay of Thatcher fans, the offensive line let the Elks’ pass rush get to senior quarterback Tyler Roebuck, taking him down in the end zone. The safety gave Round Valley the ball, and a 2 – 0 lead.

Throughout the night, both teams’ defenses controlled the game. The Eagles were hitting and hitting hard. This aggressive defensive play led to the game’s first turnover. Approaching the midway point in the first quarter, a punishing Thatcher takedown on a Round Valley’s running back Dylan Workman jarred the ball loose allowing junior defensive back Trace Goodman to recover the fumbled ball and give possession back to the Eagles. 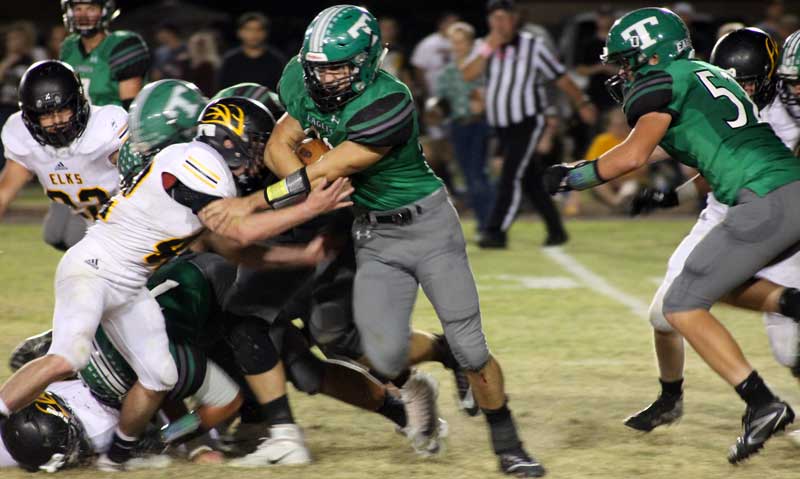 Goodman would not be the only Eagle to take the ball away from Round Valley during the contest.  In the second quarter, junior defensive back Jack Kortsen picked off Round Valley senior quarterback Markas Adams, ending the Elks drive near the red zone. Then on the next Round Valley possession, Thatcher’s senior linebacker Jordan Herbert would also snatch up a loose ball, taking it away from the Elks on a promising drive. 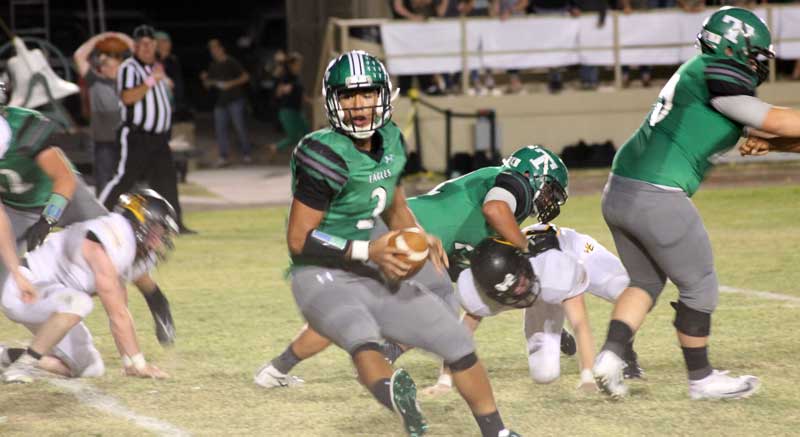 Round Valley was able to get into the end zone once in the first half, however, but the inspired defensive play of the Eagles did not allow any additional scoring before the intermission. As the half ended, the Elks had a slim 9 – 0 lead as the teams headed into the locker room. 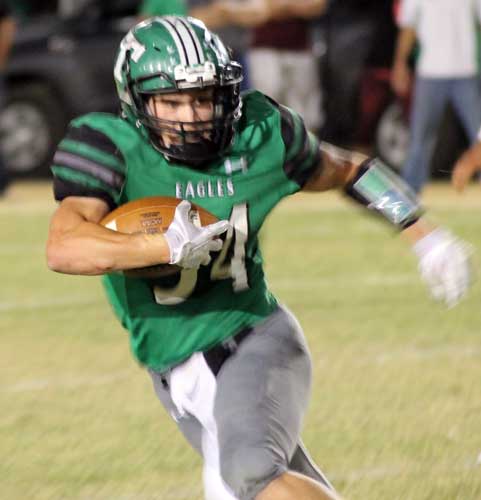 Photo By L. Scott Bennett: Quinton Turley takes off on one of his runs.

After a Thatcher fumble on their opening drive of the second half, Round Valley had the ball with an extremely short field.  Getting the ball all the way to the Eagles 15-yard line, the bend but don’t break defense shut down the Elks once again. This time, the Thatcher defense was able to hold Round Valley to a field goal thus keeping the contest a two-possession game at 12 – 0.

On the ensuing kickoff, junior Quinton Turley gave the Eagles decent field position at their own 30-yard line by returning the kick 17 yards. Then, on the first play of the drive, Roebuck called his own number and scampered 30 yards to the Elks’ 40. The Eagles then looked as if they were going to self-destruct and kill the drive.

After being penalized for an illegal shift and then a false start, Thatcher was moving backward and the faithful were likely thinking, oh no, here we go again. However, head coach Sean Hinton calmed his team and Roebuck kept the drive alive. After junior running back Riley Morris powered the ball all the way to the Round Valley 1-yard line behind some smashmouth running, Morris followed his center into the end zone for the Eagle’s first and only points on the night. After a missed 2-point try, the Eagles had pulled to within 12 – 6 with just over five minutes remaining in the third quarter. 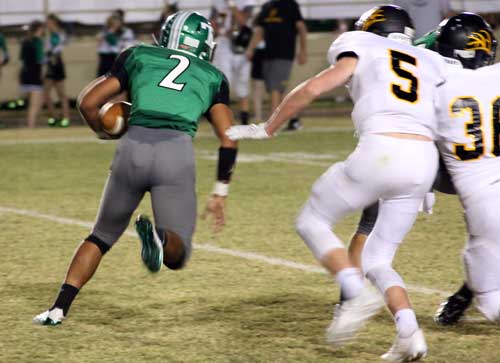 Photo By L. Scott Bennett: Tyler Roebuck runs for his life against a herd of Elks.

The defenses on both teams continued to dictate the game. The only scoring of the fourth quarter came when Round Valley was able to punch it in with a little over nine minutes remaining in the game. Despite a valiant effort, the Eagle comeback was not meant to be, and Thatcher suffered their first loss of the season 20 – 6.

After the game, Thatcher head coach Sean Hinton took the blame for the loss. Hinton indicated he could have done more to have his boys ready to play, explaining that he would next time.  Hinton was also complimentary of his defense, indicating that they had several great defensive stands.

Round Valley, which now has the top spot in the 2A East, will host the 5-3 Pima Roughriders next Friday night in Eagar. The Thatcher Eagles will travel to San Carlos to take on the 2-6 Braves.

While Thatcher came up short tonight, the season will be decided in the playoffs. The contest against Round Valley could be a preview of the 2A State Championship game, and the Eagles will be looking for payback should the two meet. While the Elks took the day, you can be assured that Hinton’s Eagles will be ready to play come playoff time. Rest assured Thatcher is looking to avenge tonight’s loss and repeat as state champions.