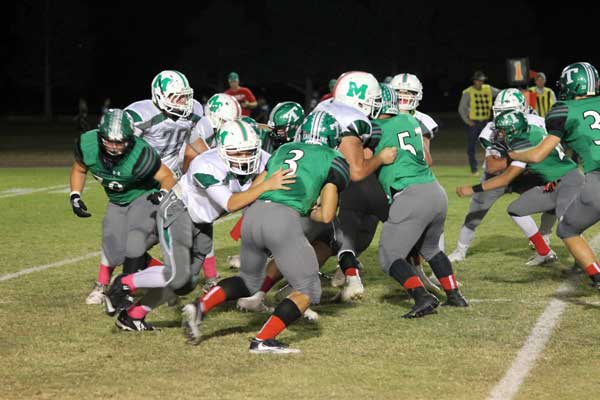 Photo By L. Scott Bennett: Thatcher dominated Miami on its way to a 59-6 victory.

It was Senior Night at John T. Mickelson Field as the Miami Vandals (4-6 overall, 1-5 section) came into town to take on the Thatcher Eagles (8-2 overall, 5-1 section).  In a game that was all Thatcher, Eagles fans would go home happy after witnessing the birds close out regular season play with a decisive 59-6 victory.

Taking the opening kickoff, Miami narrowly escaped what appeared to be a Thatcher pick-6 when Eagles senior Jake Dunlap picked off the Vandal quarterback at the 50 yard line and took it in for the score.  The play was called back and the points were taken off the board, but it would only be a matter of seconds before Dunlap would put the points right back on the scoreboard for the Eagles.

After forcing a punt, Thatcher started its first offensive series on its own 37.  It only took the Eagles three plays to get in to the end zone, which this time would stay on the board.   After two great runs moved the ball to Miami’s 30, Dunlap called his own number and took it to the house.  After junior Tormod Sandven hit the PAT, the Eagles were up 7–0.

The Eagles’ defense, which played near perfect the entire night, forced Miami to punt after its second offensive series.  After junior Tyler Rosebuck’s 25-yard punt return, the Eagles started the series on the Vandal’s 25 yard line.  On first down, Dunlap hit senior Aric Petersen, who, after shaking a tackle, took it in to the end zone to add to the Thatcher lead.  After a successful PAT, the Eagles were up 14-0.

Sophomore Quinton Turley got in on the scoring action for Thatcher when he took one in for the Eagles on their third offensive series.  After the score, Thatcher Coach Sean Hinton decided to go for two and sophomore Riley Morris pounded it through the middle for the successful try.  This score came with 26.5 seconds left in the first quarter and gave Thatcher a 22-0 lead.

The Vandals were all but put away in the second quarter as the Eagles would find the end zone four more times before the break.  Dunlap would take another one in on the ground; senior Corbin Brown would get one of his own when he took it in from the 8, and senior Dallin Cook also got in on the scoring action when he grabbed a Dunlap pass for a 36-yard score. Finally, after Thatcher recovered a Miami fumble on the Vandal’s 23 yard line with only 10.6 seconds left to play in the half, Dunlap hit senior Jon Trujillo as time expired to give the Eagles a 51–6 halftime lead. 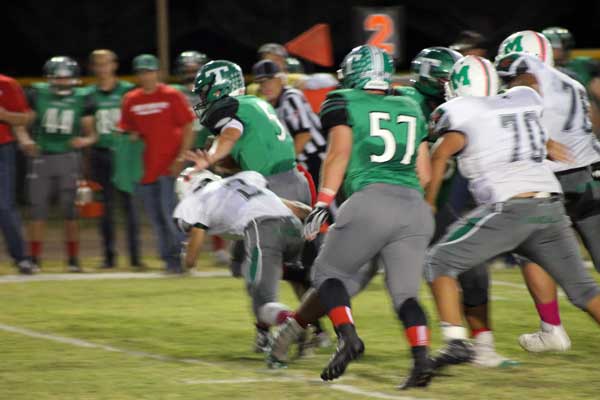 With a lead of greater than 42 points, the entire second half was played under the mercy rule with the clock running continuously, and the game came to a quick end.  Thatcher would find the end zone only once in the second half when, in the fourth quarter, senior Brandon Hayes set the Eagles up after a 35-yard run that gave them first and goal from the Vandal’s 10 yard line.   Junior Tyler Roebuck, who had replaced Dunlap at QB, then kept it on the ground on a quarterback keeper, taking it 10 yards for the score.  After a successful 2-point conversion, Thatcher extended its lead to 59–6, which would be the final score.

Throughout the night, Thatcher dominated on both sides of the ball.  The offense, which only had one turnover late in the game, played near flawless football, scoring on almost every possession.  Dunlap, who finished with two rushing touchdowns and three more through the air, ran the offense with precision.

The Eagles’ defense, which only gave up one touchdown on the night, completely shut down the Vandals’ running game.  While Miami did find some success through the air, the Eagles’ defense followed a bend but don’t break philosophy, which kept Miami from scoring after multiple trips to the red zone.

Miami finished the season ranked number 3 in the 2A division and will travel to Chandler to face number 14-seed Chandler Prep (8-2 overall, 5-0 2A Metro East). Even though Thatcher is the higher seed, it has to travel because Chandler Prep won its section while Thatcher finished second in the 2A East Section behind Round Valley.

Safford (5-5 overall, 3-2 section) lost its final game game to Queen Creek American Leadership Academy, 45-22. The Bulldogs squeaked into the playoffs as a number 12 seed but will have to travel to Tucson to face number 5 seed Sabino on Saturday at 6 p.m.

Update: The Thatcher football game has been moved to Chandler Seton Catholic at 1150 N. Dobson Rd. and will start at 7 p.m.