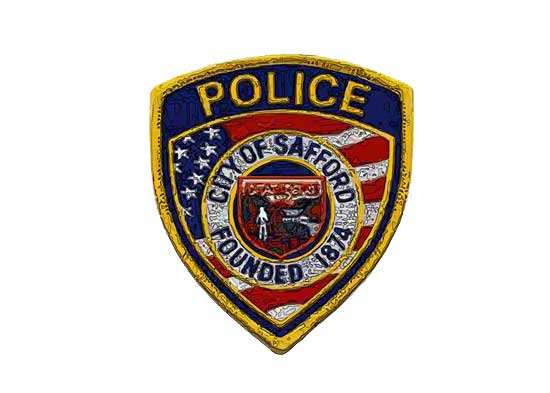 A Safford police officer on duty on Wednesday, October 2, 2019 noticed a black Toyota coupe traveling south on 1st Avenue at approximately 1:00 p.m. The vehicle entered a 45 MPH area but continued driving slightly slower than 35 MPH. The officer conducted a records check on the vehicle’s license plate, which indicated that the license plate belonged on a 1993 Chevy four door sedan.

The officer asked if there were any firearms in the vehicle and Mendoza handed him a pocket knife that had been in the center console and also said that there was a machete on the passenger side of the car. According to the police report all of the occupants of the car seemed nervous. The driver and passenger tried to roll cigarettes and their hands were trembling. A records check of the vehicle’s VIN number showed that the car was registered to Mendoza.

Two other officers arrived on the scene to assist. Mendoza was removed from the vehicle and placed in handcuffs. The officer told him he was under arrest for displaying a fictitious license plate. The officer searched him and found a cap to a hypodermic needle. The officer asked if Mendoza had any needles but he said that he had already disposed of it. Dispatch confirmed that Mendoza’s license was suspended for failure to appear.

The passengers were removed from the car and gave consent to be searched. The woman in the backseat was asked if there was anything illegal in the vehicle or on her person. She replied that there was not and said, “you can check me.” The woman was asked to remove everything from her pockets. She placed the contents on the hood of the vehicle. Among the items was a baggie, which contained heroin. She told the officer that it was for personal use.

Officers found a small brown jewelry box in the center console that had a crystal-like substance that appeared to be methamphetamine. Officers removed the machete and a back pack that contained tow hypodermic needles containing a brown liquid inside of them, and a spoon with burn marks and residue. A large knife, approximately nine inches in length was also found in the vehicle.

The male passenger said that he knew the machete was in the car but that it was not his. He admitted that the backpack was his and that he initially lied about it because of the large knife. He said that he is not supposed to have weapons.