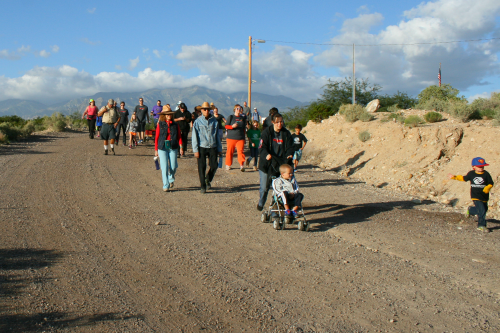 SAFFORD – Community members gathered early Saturday morning to take a walk for a good cause. The mantra rippling through the crowd was that exercise and good work never felt so good.

The Boys & Girls Club of the Gila Valley set up for the 9th annual Salsa Walk at 6 a.m. Roughly 60 individuals participated in the walk, gathering at Discovery Park to start the early, brisk walk to the SalsaFest venue in Downtown Safford. Proceeds from the event benefit the club. 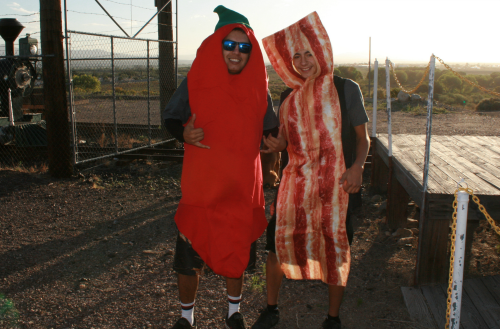 Brooke Curley Photo/Gila Valley Central: John-Michael Martinez dressed as the chili pepper and Tanner Kouts as the bacon during the Salsa Walk.

Five teams participated, including the Boys & Girls Club, A Cut Above, Bull Family Dentistry, Gila Valley Clinic and the First Methodist Church. After buying the $20 shirts for their participants, the teams lined up at the starting area. Each team was competing for several awards. The first award was the Burning Soul,which went to the team with the most members. The second award was the Sizzling Style, which went to the most creative team. The walk ended on the Safford City Hall lawn, where the awards and prizes were given. Breakfast burritos were given to the attendants by J.D’s Grill house. 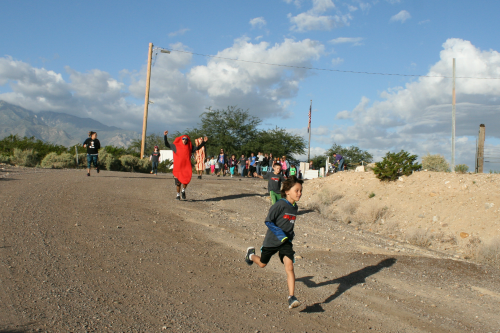 Jayce Evans and John Jurkofsky walked for the First United Methodist Church team. It was their third time participating in the event. Evans told Gila Valley Central that she enjoyed the atmosphere.

“There’s a comradery here,” Evans said. “Getting acquainted with new people, it’s a beautiful (thing) and for a good cause. It’s a good event.”

John Jurkofsky told Gila Valley Central that he thought it was a good chance for the community to band together.

“It’s a chance to stop from our daily routine having a structure and to have new energy directed into a purpose; the purpose to be ourselves and have a good time together,” Jurkofsky said. “And while we have a good time, we have the goal of bringing our community together and widening our awareness of other people.”