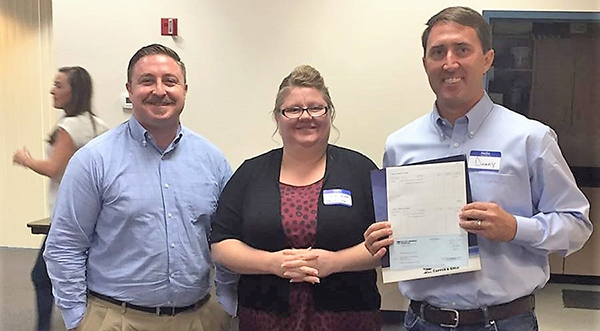 The project, which is sponsored through the Boys & Girls Club of the Gila Valley, received an $80,000 grant from FMI’s Community Investment Fund on Tuesday. The check brings the total amount raised to roughly $87,000 of the project’s predicted $157,000 budget. The group is looking to raise about another $35,000 through grants and public donations.

The project, if fully funded, is slated to completely resurface the basketball courts next to Safford Middle School, replace all of the backboards and rims, improve lighting, repair signs and fencing and add a drinking fountain. 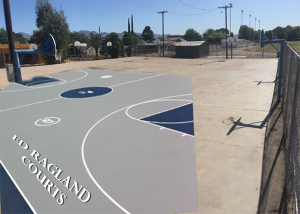 Graham County Supervisor Danny Smith began the courts project with Tad Jacobson after lamenting on the condition of the courts and how much they are used by the community. Smith, who is the project’s supervisor, said the initial 53 individual donors made it possible to receive the grant from FMI.

“It’s the 50-plus individual contributions we received already that shows that overwhelming support when we go to apply for a grant,” Smith said. “I’m really thankful for that.” 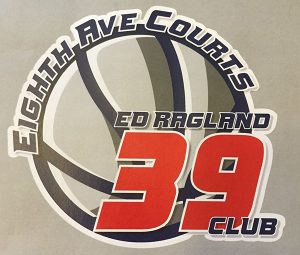 Contributed Photo
Those who donate $39 join Ragland’s 39 Club and receive a sticker.

The refurbished courts will be named after Ed Ragland, who has run a fifth- and sixth-grade basketball league during the winter in Safford for the past 39 years. Smith estimated roughly 8,000 players have participated in the league over the years.

Gila Valley Recreation Foundation Director Chris Taylor is one of those players who was groomed under Ragland’s tutelage. Taylor now serves as a coach in Ragland’s league.

“He’s been a great mentor my entire life,” Taylor wrote in a message to Gila Valley Central. “I can’t think of a more deserving person than Ed to receive this honor.”

The recreation foundation is also a sponsor of the project and previously donated $2,500 in June. Taylor said he and the foundation are strong supporters of the project because it is badly needed in the community.

“I am passionate about (it) because we need so many more wholesome activities for our youth to engage in so that we can protect them from the dangers that lurk when they have nothing positive to do,” Taylor said.

For more information on the project or to donate visit its GoFundMe page at https://www.gofundme.com/2676jhx6.

Since 2009, the Graham County Community Investment Fund has invested approximately $3.5 million in locally-identified projects affecting change in the following community priority areas: community and economic development, community health and safety, education, and environment, according to a press release.

Other recipients of the 2016 grants include: An $83,800 grant to the city of Safford to refurbish Glenn Meadows Park; a $51,200 grant to Eastern Arizona College for its Arizona Regional Advanced Manufacturing Professional Upgrade Project; a $75,000 grant to Safford Unified School District for its Training & Technology Center project and a $60,000 grant to Southeastern Arizona Community Unique Services to supplement senior programs.